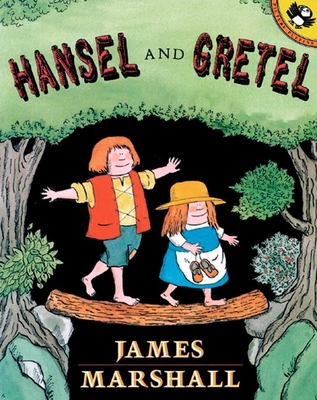 Beloved author James Marshall--creator of George and Martha--puts a hilarious twist on a classic tale in his retelling of Hansel and Gretel.

Abandoned in the woods, what will Hansel and Gretel - so innocent, so vulnerable, so deliciously plump - do when they come face-to-face with a dastardly, ugly, over-dressed witch?

Praise For Hansel and Gretel…

"Once again Marshall works his magic on a popular tale, retelling without reshaping it and infusing both text and pictures with ingenuous simplicity lit by flashes of roguish humor. Gretel is the clearer-eyed here--the first to comprehend that the chubby, scowling woodcutter's wife (never specifically referred to as mother or stepmother) means no good, and that the gaudily dressed woman in the candy house is a witch. After the witch is "roasted to a regular crisp" in her own oven, Hansel and Gretel return home in triumph and are last seen decked with jewels, posing with their joyful father. Marshall's comic genius is less appropriate to this dark tale of betrayal than to "Red Riding Hood" and "The Three Little Pigs," which better lend themselves to farce; but his fans will probably be delighted with this anyway."--Kirkus Reviews

James Marshall was born in San Antonio, Texas, and grew up sixteen miles outside of the town on the family farm. His father, who worked for the railroad, had his own dance band in the thirties and appeared on the radio. His mother, also musical, sang in the church choir. So it wasn't surprising when Jim considered playing the viola for a career and received a scholarshipto attend the New England Conservatory of Music in Boston. But during an airplane trip he was jerked out of his seat and injured his hand, and that was the end of his musical career.

He returned to San Antonio College and later Trinity, where he studied French under Harry Allard, his future collaborator. After moving East, Jim graduated from Southern Connecticut State University with a degree in history and French. The French major somehow wound up trying to teach Spanish in a Catholic school in Boston. Before long he was looking for a new profession.

On a fateful summer afternoon in 1971 James Marshall lay on his hammock drawing pictures. His mother was inside the house watching Who's Afraid of Virginia Wolf on TV. The strident voices of the movie's protagonists, George and Martha, split the quiet air, and as the sketches began to take shape, history was made ... and James Marshall never had to look for another profession.

And so, with" tongue-in cheek" Jim Marshall began his career and became one of the most prolific and successful author/illustrators of children's books. He is best known for his series on the mischievous exploits of Fox, a debonair, lazy showoff; the uproarious adventures of the two Cut-Ups, Spud and Joe; George and Martha; and the misadventures of the Stupidfamily.

The Washington Post said in a recent review of his work, "There are few better writers and illustrators for children now than Marshall. Certainly there is no one else working today who more successfully captures the child's point of view than does the creator of George and Martha and the Stupids". The New York Times said about the Fox books: "The miracle of Mr.Marshall's work is that so often his stories are as profound as they are simple". He illustrated new versions of many children's classics, including Goldilocks and the Three Bears, for which he received a Caldecott Honor, Red Riding Hood, The Three Little Pigs, and Hansel and Gretel.

In an interview with Texas Monthly, Jim Marshall said about his work: "People have very oddideas of what a children's writer should be like. Children always expect me to look like a hippopotamus and adults assume that by nature I have to be a little off the wall".

James Marshall died in October of 1992. He divided his time between an apartment in the Chelsea district of New York and his home in Mansfield Hollow Connecticut.