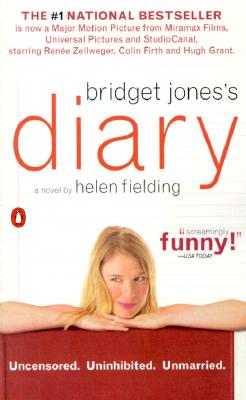 "130 lbs. (how is it possible to put on 4 pounds overnight? Could flesh have somehow solidified becoming denser and heavier (repulsive, horrifying notion)); alcohol units 2 (excellent) cigarettes 21 (poor but will give up totally tomorrow); number of correct lottery numbers 2 (better, but nevertheless useless)?"

This laugh-out-loud chronicle charts a year in the life of Bridget Jones, a single girl on a permanent, doomed quest for self-improvement--in which she resolves to: visit the gym three times a week not merely to buy a sandwich, form a functional relationship with a responsible adult, and not fall for any of the following: misogynists, megalomaniacs, adulterers, workaholics, chauvinists or perverts. And learn to program the VCR. Caught between her Singleton friends, who are all convinced they will end up dying alone and found three weeks later half-eaten by an Alsatian, and the Smug Marrieds, whose dinner parties offer ever-new opportunities for humiliation, Bridget struggles to keep her life on an even keel (or at least afloat). Through it all, she will have her readers helpless with laughter and shouting, "BRIDGET JONES IS ME "