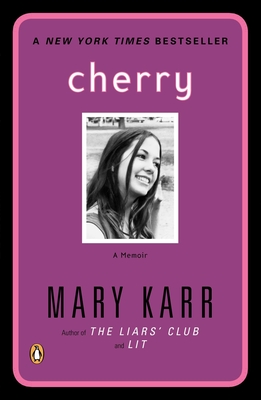 From Mary Karr comes this gorgeously written, often hilarious story of her tumultuous teens and sexual coming-of-age. Picking up where the bestselling The Liars' Club left off, Karr dashes down the trail of her teen years with customary sass, only to run up against the paralyzing self-doubt of a girl in bloom. Fleeing the thrills and terrors of adolescence, she clashes against authority in all its forms and hooks up with an unforgettable band of heads and bona-fide geniuses. Parts of Cherry will leave you gasping with laughter. Karr assembles a self from the smokiest beginnings, delivering a long-awaited sequel that is both "bawdy and wise" (San Francisco Chronicle).

Mary Karr's poems and essays have won Pushcart prizes and have appeared in magazines such as the New Yorker, The Atlantic, and Parnassus. She was a Bunting Fellow at Radcliffe College, and is now the Jesse Truesdale Peck Professor of English Literature at Syracuse.

“A compelling ride through [Karr’s] adolescence….What distinguishes Karr is the ability to serve up her experiences in a way that packs the wallop of immediacy with the salty tang of adult reflection…her descriptions of the bruised-lip, druggy wonder of teenage love are precise, unsentimental, and lovely.” —Chicago Tribune

“The Liars’ Club left no doubt that Mary Karr could flat out write…the one question everyone had upon finishing her story was, could she do it again? Cherry lays that question to rest once and for all….It never lacks for those trademark Karr details, but it’s about all of us. —Newsweek

“A smart, searing memoir….Romance, in all of its wondrous and heartbreaking incarnations, is Karr’s great subterranean subject, the ground upon which her wily, whip-smart writing catches root.” —Lisa Shea, Elle

Stunning…If The Liars’ Club succeeded partly because of its riveting particularity, Cherry succeeds because of its universality. The first book is about one harrowing childhood, the second about every adolescence. She can turn even the most mundane events into gorgeous prose.” —The New York Times Book Review

“Cherry is the kind of book a brave parent could do a lot worse than to give to a teenager….Teenage girls might come away from it knowing that they’re not freaks, that mistakes aren’t fatal, and that good writing kisses just about everything better. And for teenage boys, reading Cherry would be like stealing the other team’s playbook….Mary Karr gives memoir back its good name.” —San Francisco Chronicle

“Here, intact, is the smart, sassy, wickedly observant voice first met in The Liars’ Club, a voice that knows how to tell a story in a crackling vernacular that feels exactly true to its setting.” —The Washington Post

“Cherry delivers. Karr still has her delicious knack for making you guffaw through horrible events…its humor, warmth, and crackling language should keep Karr’s fans hungering for another round.” —People Magazine

“Karr writes about adolescence with the same emotional precision that illuminated her account of childhood…[she] nails with wonderful specificity the complex way adolescents bond intellectually and emotionally. Her descriptions of her early sexual experiences are also original. Her language is frank without becoming clinical, and she captures the swooning tenderness of a kiss without sounding sentimental…firmly rooted though it is in a particular time and place, Cherry, like all serious autobiographies, is about something much more universal: the construction of a satisfying identity or, more precisely, the discovery of a fundamental self that was there all along.” —The Philadelphia Inquirer

“It’s the powerful spiked punch of Karr’s writing that amazes…Cherry is about the dizzy funk of female teen sexuality, and Karr captures the innocence and dirt of it, the hunger and the thrill, with exquisite pitch. Karr’s connection to her younger sexual self is profound with mercy or nostalgia….Karr identifies the vulnerable, frightening gap between most girls’ night thoughts and those in the day….Right now, in this remembrance of blooming, Karr continues to set the literary standard for making the personal universal.” —Entertainment Weekly

“This book is best when it portrays things common to all of us in adolescence. The woeful sense of isolation. The fierce desire to have friends. The agitated, wondrous discovery of things sexual. Those awkward kisses in the dark. And the risks.” —USA Today

“This book is about being a female adolescent, a horrible fate; the best that can be said of it is that one does recover. The extraordinary thing about Karr, in addition to the poetry of her writing, is her stunning honesty.” —Molly Ivins, Ft. Worth Star-Telegram

“Awesomely written…Cherry is beautifully wrought and tart in its angst-wrangling….Karr can render sentences so powerful as to make you bow your head in reverence.” —The Village Voice

“Cherry is beautifully written, without a single word wasted. Karr’s poetic yet tensile language creates exceptional landscapes, both physical and emotional…her broad but precise descriptions, coupled with piercing insights into the sometimes agonizing trials of growing up, create fully realized characters with whom the reader can immediately empathize….Hardly a soul alive hasn’t felt exiled in the dark territory of adolescence; Karr maps this landscape expertly and candidly.” —The San Diego Union

“Step aside, J. D. Salinger, and take your alter ego Holden Caulfield with you. Mary Karr has staked out your turf, the upended land of adolescence. And she is just smart, angry, sensitive and self-mocking enough to defend it with everything she’s got…this time Karr has created another fiercely poetic and alternately bruising, comic, and picaresque account of her wild and painful journey through early adolescence. And if ever the tortuous metamorphosis from caterpillar to damaged butterfly has been captured in print, this is it…the tales of her first serious crush, first kiss and first date [are] each gorgeously delineated in all their tragicomic dimensions, and unique in the way they capture the overwhelming combination of attraction and repulsion involved in early sexual experiences. But everything Karr touches is emblazoned with this raw honesty and a sense of the breathtaking confusion and emotional terrorism of adolescenc