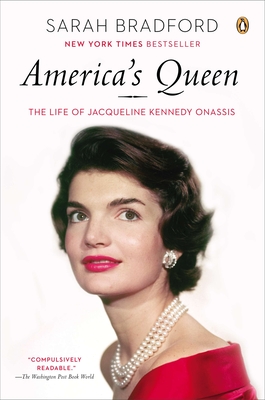 The Life of Jacqueline Kennedy Onassis

Acclaimed biographer Sarah Bradford explores the life of Jacqueline Kennedy Onassis, the woman who has captivated the public for more than five decades, in a definitive portrait that is both sympathetic and frank. With an extraordinary range of candid interviews—many with people who have never spoken in such depth on record before—Bradford offers new insights into the woman behind the public persona. She creates a coherent picture out of Jackie’s tumultuous and cosmopolitan life—from the aristocratic milieu of Newport and East Hampton to the Greek isles, from political Washington to New York’s publishing community. She probes Jackie’s privileged upbringing, her highly public marriages, and her roles as mother and respected editor, and includes rare photos from private collections to create the most complete account yet written of this legendary life.
Jacqueline Kennedy Onassis's life is once again the center of interest with the 2016 release of the Pablo Larrain movie "Jackie", starring Natalie Portman.

Praise For America's Queen: The Life of Jacqueline Kennedy Onassis…

"Some of the most personally knowledgeable observations about [Jacqueline Kennedy Onassis] that have ever been put into print." —The Boston Globe

Sarah Bradford is a historian and biographer. Her previous books include Cesare Borgia, Disraeli, Princess Grace, George VI, Splendours and Miseries: A Life of Sacheverell Sitwell, Elizabeth:: A Biography of Her Majesty the Queen, America’s Queen: The Life of Jacqueline Kennedy Onassis, and Lucrezia Borgia.
Loading...
or
Not Currently Available for Direct Purchase