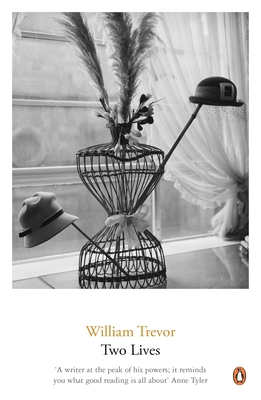 In Reading Turgenev, which was shortlisted for the Booker Prize, an Irish country girl is trapped in a loveless marriage with an older man, but finds release through secret meetings with a man who shares her passion for Russian novels.

My House in Umbra tells of Emily Delahunty, a writer of romantic novels, who helps survivors of a bomb attack on a train to convalesce, inventing colorful pasts for her patients.

Two novels, two women who retreat further into the realm of the imagination until the boundaries between what is real and what is not become blurred.

“Two Lives offers two superb novels in one volume . . . as rich and moving as anything I have read in years. . . . Marvelous.” —The Guardian

“A sensibility reigns here which is at once inquisitive and loving. . . . Trevor’s is among the most subtle and sophisticated fiction being written today.” —John Banville, The New York Review of Books

“A writer at the peak of his powers; [Two Lives] reminds you what good reading is all about.” —Anne Tyler, Chicago Sun Times

“One of the most beautiful and memorable things Trevor has written.” —Hermione Lee, The Independent on Sunday (U.K.)

“These novels will endure. And in every beautiful sentence there is not a word out of place.” —Anita Brookner, The Spectator (U.K.)

“Trevor’s adroit playing-off of two worlds in each of the Two Lives—the sterile and the sublime—enables him to balance humor and heartbreak in perfect equilibrium.” —John Walsh, The Sunday Times (London)

“He writes like an angel, but is determined to wring your heart . . . Trevor at his most evocative and haunting.” —The Daily Mail (U.K.)