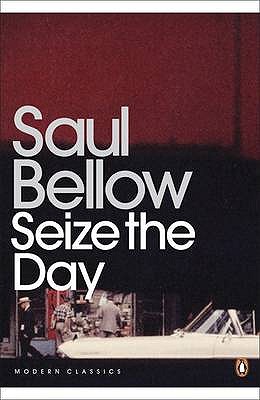 What makes all of this so remarkable is not merely Bellow's eye and ear for vital detail. Nor is it his talent for exposing the innards of character in a paragraph, a sentence, a phrase. It is Bellow's vision, his uncanny ability to seize the moment and to see beyond it. "Chicago Sun-Times"
Fading charmer Tommy Wilhelm has reached his day of reckoning and is scared. In his forties, he still retains a boyish impetuousness that has brought him to the brink of chaos: He is separated from his wife and children, at odds with his vain, successful father, failed in his acting career (a Hollywood agent once cast him as the type that loses the girl ), and in a financial mess. In the course of one climactic day he reviews his past mistakes and spiritual malaise, until a mysterious philosophizing con man grants him a glorious, illuminating moment of truth and understanding, and offers him one last hope .
This Penguin Classics edition contains an introduction by Cynthia Ozick.
For more than seventy years, Penguin has been the leading publisher of classic literature in the English-speaking world. With more than 1,700titles, Penguin Classics represents a global bookshelf of the best works throughout history and across genres and disciplines. Readers trust theseries to provide authoritative texts enhanced by introductions and notes by distinguished scholars and contemporary authors, as well as up-to-datetranslations by award-winning translators.

Saul Bellowwas praised for his vision, his ear for detail, his humor, and the masterful artistry of his prose. Born of Russian Jewish parents in Lachine, Quebec in 1915, he was raised in Chicago. He received his Bachelor's degree from Northwestern University in 1937, with honors in sociology and anthropology, and did graduate work at the University of Wisconsin. During the Second World War he served in the Merchant Marines.

His first two novels, Dangling Man(1944) andThe Victim(1947) are penetrating, Kafka-like psychological studies. In 1948 he was awarded a Guggenheim Fellowship and spent two years in Paris and traveling in Europe, where he began his picaresque novelThe Adventures of Augie March, which went on to win the National Book Award for fiction in 1954. His later books of fiction includeSeize the Day(1956);Henderson the Rain King(1959);Mosby's Memoirs and Other Stories(1968);Mr. Sammler's Planet(1970);Humboldt's Gift(1975), which won the Pulitzer Prize;The Dean's December(1982);More Die of Heartbreak(1987);Theft(1988);The Bellarosa Connection(1989);The Actual(1996);Ravelstein(2000); and, most recently, Collected Stories(2001). Bellow has also produced a prolific amount of non-fiction, collected inTo Jerusalem and Back, a personal and literary record of his sojourn in Israel during several months in 1975, andIt All Adds Up, a collection of memoirs and essays.

Bellow's many awards include the International Literary Prize forHerzog, for which he became the first American to receive the prize; the Croix de Chevalier des Arts et Lettres, the highest literary distinction awarded by France to non-citizens; the B'nai B'rith Jewish Heritage Award for "excellence in Jewish Literature"; and America's Democratic Legacy Award of the Anti-Defamation League of B'nai B'rith, the first time this award has been made to a literary personage. In 1976 Bellow was awarded the Nobel Prize for Literature "for the human understanding and subtle analysis of contemporary culture that are combined in his work."
Loading...
or
Not Currently Available for Direct Purchase