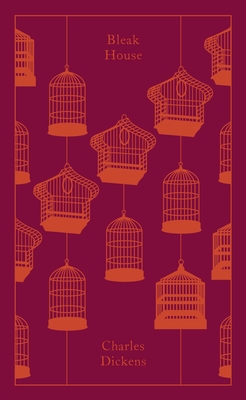 Part of Penguin's beautiful hardback Clothbound Classics series, designed by the award-winning Coralie Bickford-Smith, these delectable and collectible editions are bound in high-quality colourful, tactile cloth with foil stamped into the design. As the interminable case of Jarndyce and Jarndyce grinds its way through the Court of Chancery, it draws together a disparate group of people: Ada and Richard Clare, whose inheritance is gradually being devoured by legal costs; Esther Summerson, a ward of court, whose parentage is a source of deepening mystery; the menacing lawyer Tulkinghorn; the determined sleuth Inspector Bucket; and even Jo, the destitute little crossing-sweeper. A savage, but often comic, indictment of a society that is rotten to the core, Bleak House is one of Dickens's most ambitious novels, with a range that extends from the drawing rooms of the aristocracy to the poorest of London slums.

Charles Dickens was born on 7 February 1812. He is the author of such Classics as Oliver Twist, Nicholas Nickleby, The Old Curiosity Shop, A Christmas Carol and David Copperfield. In later works, such as Bleak House and Little Dorrit, Dickens's social criticism became more radical and his comedy more savage. His last novel, The Mystery of Edwin Drood, was never completed and he died on 9 June 1870.

“Perhaps Bleak House is his best novel. . . . When Dickens wrote Bleak House he had grown up.” —G. K. Chesterton
or support indie stores by buying on
Copyright © 2020 American Booksellers Association