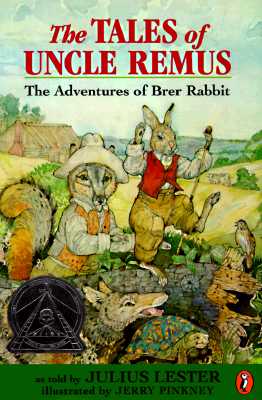 The Adventures of Brer Rabbit

The classic tales of Brer Rabbitt with a contemporary twist, by the award winning author Julius Lester and illustrated by award-winning Jerry Pinkney!

Whether he is besting Brer Fox or sneaking into Mr. Man's garden, Brer Rabbit is always teaching a valuable lesson. These classic tales are full of wit, humor, and creativity, and Julius Lester brings an added contemporary sense to these forty-eight timeless stories.

"Lester juxtaposes a contemporary voice and settings (like shopping malls) with some dialect in these "wonderfully funny folktales,"--Publisher's Weekly

Julius Lester is an American writer and an academic who taught for over three decades at the University of Massachusetts Amherst. He is also a photographer, as well as a musician who recorded two albums of folk music and original songs. His very first book was an instructional music book co-authored with Pete Seeger. His children's book, To Be a Slave, was recognized for a Newbery Honor and Lewis Carroll Shelf Award. He received a Caldecott Honor, among others, for the book John Henry.

A native of Philadelphia, Jerry Pinkney studied at the Philadelphia College of Art (now the University of the Arts) where, in 1992 he received the Alumni Award. He has been illustrating children's books since 1964, illustrating over one hundred titles, and earned the Caldecott Medal for his nearly wordless picture book The Lion & the Mouse in 2010. Among his many other accolades he has also been the recipient of five Caldecott Honor Medals, five Coretta Scott King Awards and four Coretta Scott King Honors, five New York Times Best Illustrated Book awards, and in 2006 the Original Art's Lifetime Achievement Award from the Society of Illustrators, New York, NY. In addition to his work in children's books, Jerry has had over thirty one-man retrospectives at venues ranging from the Art Institute of Chicago, Chicago, IL to the California African American Museum, Los Angeles, CA. He has exhibited in over one hundred group shows in the USA, Japan, Russia, Italy, Taiwan and Jamaica. Jerry has illustrated for a wide variety of clients, including the U.S. Postal Service, National Park Service, and National Geographic. Jerry created art for the Harry Chapin Run Against Hunger commemorative poster, a foundation that helps bring food to those in need. He was invited to create a painting for the 30th Bologna Book Fait, Bologna, Italy and the NASA Art Collection at the John F. Kennedy Space Center. He was appointed to serve on the U.S. Postal Services Citizens Stamp Advisory Committee (1982-1992). In 2001 Jerry was invited by Laura Bush to illustrate and design the White House Christmas Program. He has held professorships teaching art at Pratt Institute, Brooklyn, NY; the University of Delaware, Newark, DE; and the University of Buffalo, Buffalo, NY. In 2003, Jerry was appointed to the National Council of the Arts - NEA (2003-2009). His art can be found in the permanent collections at the Library of Congress, the New York Public Library, the Delaware Art Museum and the Brandywine River Art Museum. His works have been featured in The New York Times, Arts Section, American Artists Magazine, The Horn Book Magazine, The CBS Sunday Morning Show and PBS Reading Rainbow Room. Pinkney is also a past trustee for the Eric Carle Museum of Picture Book Art and the Katonah Museum of Art. He lives with his wife, author Gloria Jean, in Westchester County, NY.
Loading...
or support indie stores by buying on