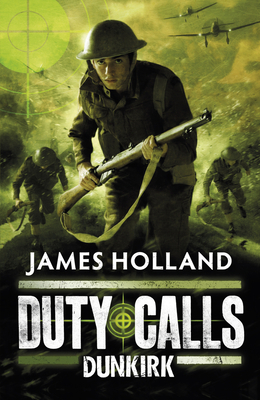 This gripping true-to-life story looks at the battle of Dunkirk, one of the most dramatic events of World War II

Friday, May 24, 1940: Private Johnny Hawke, aged 16, awakens to artillery fire. Hours later, Stukas scream down from the sky. Messerschmit fighters roar towards his regiment. Trucks burst into flames. Now men and mules lay dead and dying, severed limbs twisted grotesquely as blood soaks the cobbled streets. Young Private Hawke just wants to do his duty and serve his country. But as he—and his fellow soldiers—prepare to stop the German advance, there's only one question on everyone's lips. How will they survive?

"Holland is a superb historian who knows his stuff."  —Daily Telegraph

James Holland is an award-winning historian, writer, and broadcaster. The author of a number of best-selling histories including Battle of Britain, Dam Busters, and most recently, The War in the West, he has also written nine works of historical fiction, including the Jack Tanner novels. He has presented - and written - a large number of television programmes and series, and is also Co-founder of the Chalke Valley History Festival. He can be found on Twitter as @James1940.
or
Not Currently Available for Direct Purchase