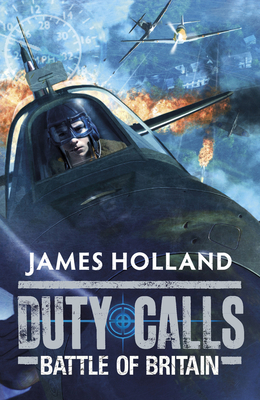 See World War II up close, and get thrown deep into the heart—and horror—of Britain's darkest, and finest, hour

Pilot officer Archie Jackson, 19, is in control of the RAF's newest fighter aircraft, a Supermarine Spitfire. Now he has the Luftwaffe in his sights and only one thing matters: defending Britain. Suddenly planes are falling from the sky, exploding and spiraling into the English Channel. France has fallen and the swastika flies over Occupied Europe. Only these young pilots—barely out of boyhood—stand between Britain and a Nazi invasion . . .

"Plenty of action. . . sharp dialogue and swift characterisation. The whole is intelligently structured so that this is absorbing and thoughtful as well as tense and exciting."  —Daily Telegraph on Blood of Honour

James Holland is an award-winning historian, writer, and broadcaster. The author of a number of best-selling histories including Battle of Britain, Dam Busters, and most recently, The War in the West, he has also written nine works of historical fiction, including the Jack Tanner novels. He has presented - and written - a large number of television programmes and series, and is also Co-founder of the Chalke Valley History Festival. He can be found on Twitter as @James1940.
or
Not Currently Available for Direct Purchase