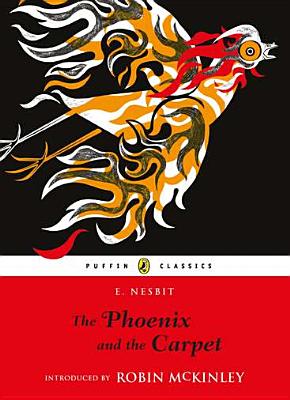 The Phoenix and the Carpet (Puffin Classics)

It's startling enough to have a phoenix hatch in your house, but even more startling when it talks and reveals that you have a magic carpet on the floor. The vain and ancient bird accompanies the children on a series of adventures through time and space which, magic being what it is, rarely turn out as they were meant . . . This sequel to Five Children and It continues the magical adventures of siblings Cyril, Anthea, Robert, Jane and their baby brother.

EDITH NESBIT was a mischievous child who grew up into an unconventional adult. With her husband, Hubert Bland, she was one of the founder members of the socialist Fabian Society; their household became a centre of the socialist and literary circles of the times. E. Nesbit turned late to children's writing. Her first children's book, THE TREASURE SEEKERS, was published in 1899 to great acclaim. Other books featuring the Bastable children followed, and a series of magical fantasy books, including FIVE CHILDREN AND IT also became very popular. THE RAILWAY CHILDREN was first published monthly in the LONDON MAGAZINE in 1905, and published as a book in 1906 and has been in print ever since.
Loading...
or support indie stores by buying on
(This book is on backorder)