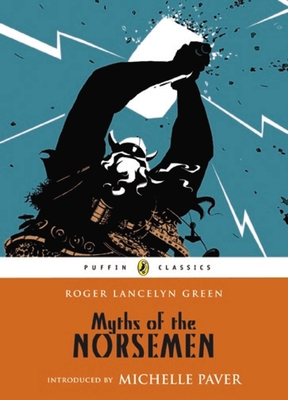 Myths of the Norsemen (Puffin Classics)

Norse myths and legends introduced by bestselling author Michelle Paver, creator of the Chronicles of Ancient Darkness collection and Gods and Warriors, her epic new Greek Bronze Age series for Puffin. The great Norse sagas are full of magic and heroic deeds. Odin's wanderings, Thor's hammer, the death of Bakkur, the vision of Ragnarok - tales which have been told since time immemorial - are given a fresh life in this version, written as one continuous exciting adventure story. Puffin Classics contain additional endnotes for children including an author profile, a guide to who's who, activities and more.

Michelle Paver (www.michellepaver.com) is the bestselling, award-winning author of Dark Matter, the Chronicls of Ancient Darkness, and the upcoming Gods and Warriors series, among other books.

Roger Lancelyn Green (author) was a British author primarily known for his retellings of Greek and Egyptian myths, including Tales of the Greek Heroes, The Tales of Troy, and Tales of Ancient Egypt.
Loading...
or support indie stores by buying on