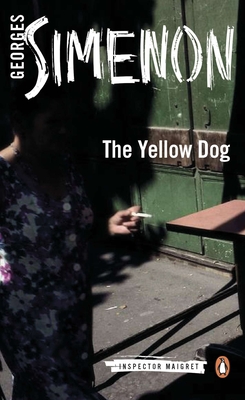 “One of the greatest writers of the twentieth century . . . Simenon was unequaled at making us look inside, though the ability was masked by his brilliance at absorbing us obsessively in his stories.” —The Guardian

In a small, seaside town in the northwest of France, the local wine dealer is wounded by a gunshot while retuning home drunk from a hotel bar. Maigret, who is heading up a mobile squad of the Paris police force, is called in by the mayor to solve the crime. But upon settling down in the hotel, Maigret quickly discovers a curious cast of characters awaits him there—and they all have something to hide.

In the course of this strange case, a customs official is shot, a retired journalist is lost and found, and a vagrant is attested, but through it all Maigret has his sights set firmly in the direction of the truth, even as a strange yellow dog haunts the neighborhood. Fast-paced and wholly unpredictable, The Yellow Dog is a sharp mystery set against the cutthroat backdrop of small town politics.

“One of the greatest writers of the twentieth century . . . Simenon was unequaled at making us look inside, though the ability was masked by his brilliance at absorbing us obsessively in his stories.” —The Guardian

“These Maigret books are as timeless as Paris itself.” —The Washington Post

“Maigret ranks with Holmes and Poirot in the pantheon of fictional detective immortals.” —People

“I love reading Simenon. He makes me think of Chekhov.” —William Faulkner

“The greatest of all, the most genuine novelist we have had in literature.” —André Gide

“A novelist who entered his fictional world as if he were a part of it.”lle —Peter Ackroyd

Georges Simenon (1903–1989) was born on February 12th, 1903 in Liege, Belgium. At the age of nineteen, Simenon embarked to Paris to begin a career as a writer.  In 1923 he began publishing under various pseudonyms, and in 1929 began the Inspector Maigret series which helped elevate him to a household name in continental Europe.  His prolific output of more than four hundred novels and the gripping, dark realism of his prose has cemented him as an inedlible fixture of twentieth century literature.  He died in 1989 in Lausanne, Switzerland.

Linda Asher is the former fiction editor at the New Yorker and the award-winning translator of works by Milan Kundera and Victor Hugo, among other celebrated authors.
Loading...
or
Not Currently Available for Direct Purchase