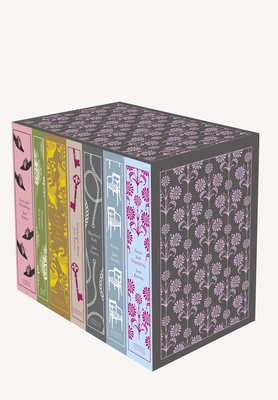 Few novelists have conveyed the subtleties and nuances of their own social milieu with the wit and insight of Jane Austen. Through her vivacious and spirited heroines and their circle, she painted vivid portraits of English middle-class life as the eighteenth century came to a close. Each of these novels is a love story and a story about marriage—marriage for love, for financial security, for social status. But they are not mere romances. Ironic, comic, and wise, they are masterly studies of the society Austen observed. The seven books in this box set—Sense and Sensibility, Pride and Prejudice, Mansfield Park, Emma, Northanger Abbey, Persuasion, and Love and Freindship (early writings and juvenilia)—contain some of the most brilliant, dazzling prose in the English language. Part of Penguin’s beautiful Hardcover Classics series, designed by the award-winning Coralie Bickford-Smith, these delectable and collectible editions are bound in high-quality, tactile cloth with foil stamped into the design.

Jane Austen was born on 16 December 1775 at Steventon, near Basingstoke, the seventh child of the rector of the parish. In her youth she wrote many burlesques, parodies, and other stories, including a short epistolary novel, Lady Susan. The novels published in Austen’s lifetime include Sense and Sensibility (1811), Pride and Prejudice (1813), Mansfield Park (1814) and Emma (1816). Persuasion was written in a race against failing health in 1815-16, and was published, together with Northanger Abbey, posthumously in 1818.  Austen died in Winchester on 18 July 1817.

Coralie Bickford-Smith is an award-winning designer at Penguin Books, where she has created several highly acclaimed series designs. She studied typography at Reading University and lives in London.
Loading...
or support indie stores by buying on
(This book is on backorder)