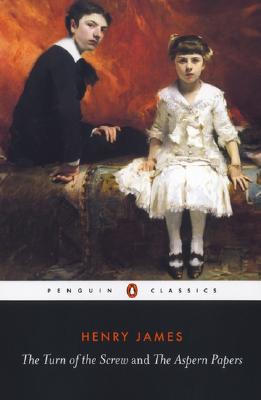 The Turn of the Screw and the Aspern Papers

In these two chilling stories, Henry James shows himself to be a master of haunting atmosphere and unbearable tension. The Turn of the Screw tells of a young governess sent to a country home to take charge of two orphans, Miles and Flora. Unsettled by a sense of intense evil within the house, she soon becomes obsessed with the belief that malevolent forces are stalking the children in her care. Obsession of a more worldly variety lies at the heart of The Aspern Papers, the tale of a literary historian determined to get his hands on some letters written by a great poet-and prepared to use trickery and deception to achieve his aims. For more than seventy years, Penguin has been the leading publisher of classic literature in the English-speaking world. With more than 1,700 titles, Penguin Classics represents a global bookshelf of the best works throughout history and across genres and disciplines. Readers trust the series to provide authoritative texts enhanced by introductions and notes by distinguished scholars and contemporary authors, as well as up-to-date translations by award-winning translators.

Henry James (1843-1916), born in New York City, was the son of noted religious philosopher Henry James, Sr., and brother of eminent psychologist and philosopher William James. He spent his early life in America and studied in Geneva, London and Paris during his adolescence to gain the worldly experience so prized by his father. He lived in Newport, went briefly to Harvard Law School, and in 1864 began to contribute both criticism and tales to magazines. In 1869, and then in 1872-74, he paid visits to Europe and began his first novel, Roderick Hudson. Late in 1875 he settled in Paris, where he met Turgenev, Flaubert, and Zola, and wrote The American (1877). In December 1876 he moved to London, where two years later he achieved international fame with Daisy Miller. Other famous works include Washington Square (1880), The Portrait of a Lady (1881), The Princess Casamassima(1886), The Aspern Papers (1888), The Turn of the Screw (1898), and three large novels of the new century, The Wings of the Dove (1902), The Ambassadors (1903) and The Golden Bowl (1904). In 1905 he revisited the United States and wrote The American Scene (1907). During his career he also wrote many works of criticism and travel. Although old and ailing, he threw himself into war work in 1914, and in 1915, a few months before his death, he became a British subject. In 1916 King George V conferred the Order of Merit on him. He died in London in February 1916. Anthony Curtis is the editor of Lyle Official Antiques Review and has compiled more than 150 price guides, which have sold more than 4 million copies worldwide.
Loading...
or
Not Currently Available for Direct Purchase