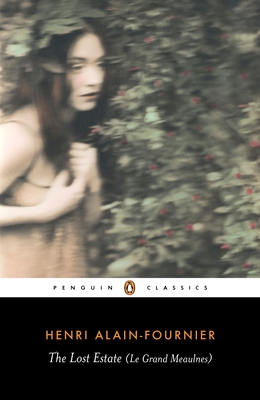 “I read it for the first time when I was seventeen and loved every page. I find its depiction of a golden time and place just as poignant now as I did then.” ―Nick Hornby

“[A] favorite . . . a beautiful and mysterious story about the end of childhood.” ―Claire Messud, The New York Times Book Review

The Lost Estate is one of many great novels—Moby-Dick and The Great Gatsby are other examples—in which the story of a charismatic hero is narrated by an awestruck, somewhat lesser figure. Why do you think Alain-Fournier chose to tell the story of Meaulnes principally through the eyes of François Seurel? What might he have gained—or lost—by having Meaulnes tell his own story?

Is François capable of being objective about Meaulnes? How does his love for his friend affect our ability as readers to judge him for ourselves?

A handful of scenes in the novel are narrated by Meaulnes, through his letters and journal. How does the impression of his personality created by these passages differ from François’s view of him?

Although Meaulnes spends much of the novel seeking to rediscover the site of the strange party that has transformed his life, it may be argued that he is really seeking something less tangible. What, on a deeper level, is Meaulnes looking for? What is the possibility that he will actually find it?

Alain-Fournier was a devoted reader of Edgar Allan Poe mysteries and the Sherlock Holmes stories of Conan Doyle. What artistic or thematic similarities do you notice between The Lost Estate and the work of these early masters of the mystery tale?

Some readers have seen The Lost Estate as two novels in one—the first half dreamlike and surreal and the second half almost painful in its realism. Do you agree with this view? Assuming that it is correct, does the dual nature of the novel undermine its feeling of unity, or, to the contrary, does it create a sense of balance and symmetry?

For Alain-Fournier’s story to work, his main characters must be young enough to embrace ideas of innocent fantasy, but old enough to marry. How does Fournier attempt to blur the distinction between childhood and adulthood, and does he succeed?

How are Alain-Fournier’s characters harmed by their unwillingness to relinquish their childhoods? Are there any positive aspects to this refusal?

How do the various main characters of The Lost Estate (Meaulnes, François, Frantz, and Yvonne) understand the meaning of love? Is there some defect in each one’s understanding?

Evaluate Monsieur de Galais as a father. Should he have raised Frantz and Yvonne differently? How?

The Lost Estate makes continual references to the weather and the change of seasons. How does Alain-Fournier use these details to illustrate and enrich the mood of his novel?

In Chapter 11 of Part Two, François tries to explain the strange fete at Les Sablonnières to Boujardon and Delouche, only to discover that they cannot grasp its mythic significance. How is it that the fete can transform the consciousness of Meaulnes and François, while leaving others totally unaffected? Does the fact that they are so affected make Meaulnes and François superior or inferior to their peers?

In The Lost Estate, is Alain-Fournier more concerned with discovering the truth about human nature or with escaping it behind a veil of fantasy? What relation can and does such a fantastic story have with truth?

Unlike the heroes of many quest tales, Meaulnes appears to achieve his desire; he finds and marries Yvonne. Why, then, does their marriage fail? What are the reasons, in addition to his involvement with Valentine, he cannot hang on to the happiness he finds with Yvonne?

Both François and Meaulnes are deeply attracted to ideas of “purity.” How does their concern with purity influence their ability to understand and embrace mature sexuality?

Alain-Fournier insisted that The Lost Estate was not “un livre du moral”—a book about ethics—but rather “un livre vivant”—a living book. Nevertheless, can moral messages be discovered in The Lost Estate? What might they be?

Alain-Fournier wrote The Lost Estate at a time when all of Europe was nearing a calamitous loss of innocence in World War I. How do you think the yearnings of the novel’s characters reflected the larger political and social moods of 1913?