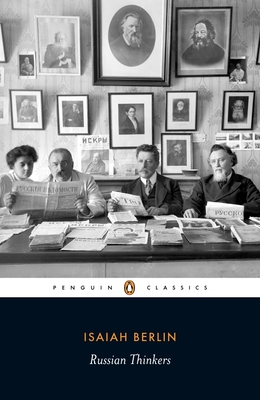 Few, if any, English-language critics have written as perceptively as Isaiah Berlin about Russian thought and culture. Russian Thinkers is his unique meditation on the impact that Russia's outstanding writers and philosophers had on its culture. In addition to Tolstoy's philosophy of history, which he addresses in his most famous essay, "The Hedgehog and the Fox," Berlin considers the social and political circumstances that produced such men as Herzen, Bakunin, Turgenev, Belinsky, and others of the Russian intelligentsia, who made up, as Berlin describes, "the largest single Russian contribution to social change in the world."

"Isaiah Berlin is an author without whom I could not have written these plays."
-Tom Stoppard, in The Coast of Utopia program

Isaiah Berlin, O.M., C.B.E., first President of Wolfson College, Oxford, from 1966 to 1975, is a Fellow of All Souls. He was a Fellow of New College from 1938 to 1950 and Professor of Social and Political Theory at Oxford from 1957 to 1967. He served as President of the British Academy of Arts and Letters. He holds honorary degrees from the universities of Brandies, Cambridge, Columbia, East Anglia, Glasgow, Harvard, Hull, Jerusalem, Liverpool, London and Tel Aviv. Sir Isaiah's work covers a wide variety of subjects, but most of his work has appeared in periodicals and symposia. Russian Thinkers is the first of four volumes edited by Henry Hardy which bring together for the first time all of Isaiah Berlin's major essays (excluding those already published in Four Essays on Liberty and Vico and Herder). Isaiah Berlin's other contributions to Russian studies include his translation of Ivan Turgenev's First Love (available from Penguin) and his Introduction to Alexander Herzen's memoirs, My Past and Thoughts. Sir Isaiah was awarded the Jerusalem Prize in 1979 for the expression in his writings of the idea of the freedom of the individual in society.
Loading...
or support indie stores by buying on
(This book is on backorder)