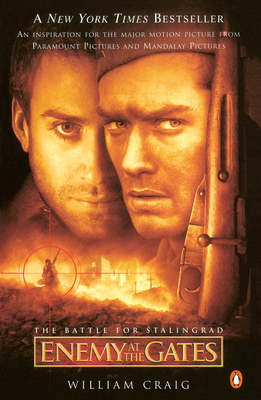 Enemy at the Gates

The Battle for Stalingrad

The bloodiest battle in the history of warfare, Stalingrad was perhaps the single most important engagement of World War II. A major loss for the Axis powers, the battle for Stalingrad signaled the beginning of the end for the Third Reich of Adolf Hitler.

During the five years William Craig spent researching the battle for Stalingrad, he traveled extensively on three continents, studying documents and interviewing hundreds of survivors, both military and civilian. This unique account is their story, and the stories of the nearly two million men and women who lost their lives.

William Craig (1929-1997), a native of Concord, Massachusetts, was educated at Columbia University. His first book, The Fall of Japan, was a documentary account of the last weeks of the Second World War in the Pacific. His first novel, The Tashkent Crisis, a thriller about espionage and international politics, was published in 1971. His Enemy at the Gates, an examination of the battle for Stalingrad, marked the culmination of five years of research, during which he traveled on three continents, studying documents and interviewing hundreds of survivors of Stalingrad.
Loading...
or support indie stores by buying on