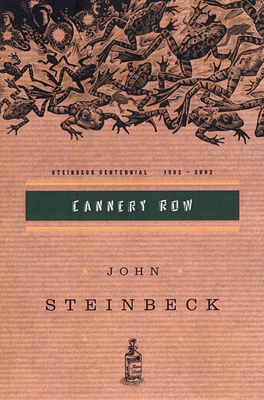 Steinbeck's tough yet charming portrait of people on the margins of society, dependant on one another for both physical and emotional survival

Unburdened by the material necessities of the more fortunate, the denizens of Cannery Row discover rewards unknown in more traditional society. Henry the painter sorts through junk lots for pieces of wood to incorporate into the boat he is building, while the girls from Dora Flood’s bordello venture out now and then to enjoy a bit of sunshine. Lee Chong stocks his grocery with almost anything a man could want, and Doc, a young marine biologist who ministers to sick puppies and unhappy souls, unexpectedly finds true love. Cannery Row is just a few blocks long, but the story it harbors is suffused with warmth, understanding, and a great fund of human values.

First published in 1945, Cannery Row focuses on the acceptance of life as it is—both the exuberance of community and the loneliness of the individual. John Steinbeck draws on his memories of the real inhabitants of Monterey, California, and interweaves their stories in this world where only the fittest survive—creating what is at once one of his most humorous and poignant works. In Cannery Row, John Steinbeck returns to the setting of Tortilla Flat to create another evocative portrait of life as it is lived by those who unabashedly put the highest value on the intangibles—human warmth, camaraderie, and love.

“Steinbeck has compounded a bitter and uproariously funny commentary on the futility of human aspiration and the barrenness of existence . . . an extraordinary mixture of wild laughter and searing pain.” — The New York Herald Tribune

“It’s one of the most thoroughly enjoyable and delicious books you’ll ever have the fortune to read.” —Chicago Sun Times

“Everything is always somehow overlaid with laughter, the special kind of laughter and contentment with one’s lot, however humble, that only John Steinbeck can put into words. . . . John Steinbeck sees his characters with deep compassion as well as amusement.” —Chicago Sunday Tribune