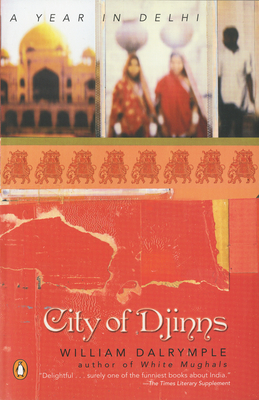 A Year in Delhi

Peeling back the layers of Delhi’s centuries-old history, City of Djinns is an irresistible blend of research and adventure.

Sparkling with irrepressible wit, City of Djinns peels back the layers of Delhi's centuries-old history, revealing an extraordinary array of characters along the way-from eunuchs to descendants of great Moguls. With refreshingly open-minded curiosity, William Dalrymple explores the seven "dead" cities of Delhi as well as the eighth city—today's Delhi. Underlying his quest is the legend of the djinns, fire-formed spirits that are said to assure the city's Phoenix-like regeneration no matter how many times it is destroyed. Entertaining, fascinating, and informative, City of Djinns is an irresistible blend of research and adventure.

William Dalrymple was born in Scotland and brought up on the shores of the Firth of Forth. He wrote the highly acclaimed bestseller In Xanadu when he was twenty-two. The book won the 1990 Yorkshire Post Best First Work Award and a Scottish Arts Council Spring Book Award; it was also shortlisted for the John Llewellyn Rhys Memorial Prize. In 1989 Dalrymple moved to Delhi where he lived for six years researching his second book, City of Djinns, which won the 1994 Thomas Cook Travel Book Award and the Sunday Times Young British Writer of the Year Award. From the Holy Mountain, his acclaimed study of the demise of Christianity in its Middle Eastern homeland, was awarded the Scottish Arts Council Autumn Book Award for 1997; it was also shortlisted for the 1998 Thomas Cook Award, the John Llewellyn Rhys Prize and the Duff Cooper Prize. A collection of his writings about India, The Age of Kali, was published in 1998.

William Dalrymple is a Fellow of the Royal Society of Literature and of the Royal Asiatic Society, and in 2002 was awarded the Mungo Park Medal by the Royal Scottish Geographical Society for his ‘outstanding contribution to travel literature’. He wrote and presented the British television series Stones of the Raj and Indian Journeys, which won the Grierson Award for Best Documentary Series at BAFTA in 2002. His Radio 4 series on the history of British spirituality and mysticism, The Long Search, recent won the 2002 Sandford St Martin Prize for Religious Broadcasting and was described by the judges as 'thrilling in its brilliance... near perfect radio.'He is married to the artist Olivia Fraser, and they have three children. They now divide their time between London and Delhi.