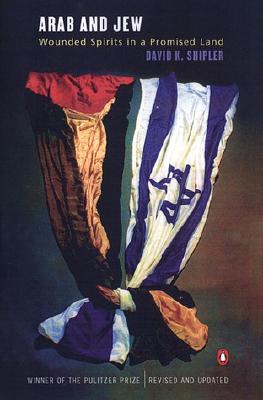 Wounded Spirits in a Promised Land, Revised and Updated

The Jew, according to the Arab stereotype, is a brutal, violent coward; the Arab, to the prejudiced Jew, is a primitive creature of animal vengeance and cruel desires. In this monumental work, David Shipler delves into the origins of the prejudices that have been intensified by war, terrorism, and nationalism.

Focusing on the diverse cultures that exist side by side in Israel and Israeli-controlled territories, Shipler examines the process of indoctrination that begins in schools; he discusses the far-ranging effects of socioeconomic differences, historical conflicts between Islam and Judaism, attitudes about the Holocaust, and much more. And he writes of the people: the Arab woman in love with a Jew, the retired Israeli military officer, the Palestinian guerilla, the handsome actor whose father is Arab and whose mother is Jewish.


Praise For Arab and Jew: Wounded Spirits in a Promised Land, Revised and Updated…

"The best and most comprehensive work there is in the English language on this subject." - Walter Laqueur, The New York Times

Rhidian Brook was born in Tenby, South Wales. The Testimony of Taliesin Jones received the Somerset Maugham and Betty Task Awards and was short-listed for the Welsh Novel of the Year. He is also the author of the novel Jesus and The Adman.
Loading...
or
Not Currently Available for Direct Purchase