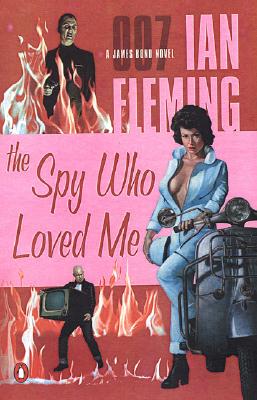 The Spy Who Loved Me

‘He was about six feet tall, slim and fit. The eyes in the lean , slightly tanned face were a very clear grey-blue and as they observed the men they were cold and watchful. His good looks had a dangerous, almost cruel quality that had frightened me. But now I knew he could smile, I thought his face exciting, in a way no face had ever excited me before …’

Vivienne Michel is in trouble. Trying to escape her tangled past, she has run away to the American backwoods, winding up at the Dreamy Pines Motor Court. A far cry from the privileged world she was born to, the motel is also the destination of two hardened killers—the perverse Sol Horror and the deadly Sluggsy Morant. When a coolly charismatic Englishman turns up, Viv, in terrible danger, is not just hopeful, but fascinated. Because he is James Bond, 007; the man she hopes will save her, the spy she hopes will love her …

Ian Fleming (1908-1964), creator of the world's best-known secret agent, is the author of fourteen James Bond books. Born in London in 1908 and educated at Eton and Sandhurst, he became the Reuters Moscow correspondent in 1929. In the spring of 1939, Fleming went back to Moscow as a special correspondent for the London Times. In June of that same year, he joined Naval Intelligence and served throughout World War II, finally earning the rank of Commander, RNVSR (Sp.). Much of the James Bond material was drawn directly from Fleming's experiences as an intelligence officer. Later, Fleming became a consultant on foreign affairs for the London Sunday Times, by which time he had become far better known as the creator of James Bond.
Loading...
or
Not Currently Available for Direct Purchase