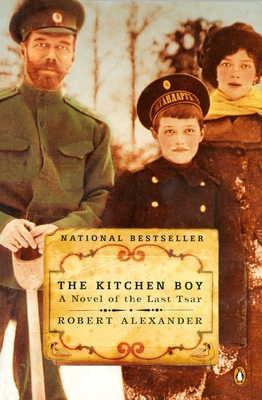 A Novel of the Last Tsar (A Romanov Novel #1)

Soon to be a major motion picture starring Kristin Scott Thomas (The English Patient), directed by Stefan Ruzowitzky (The Counterfeiters)

Drawing from decades of work, travel, and research in Russia, Robert Alexander re-creates the tragic, perennially fascinating story of the final days of Nicholas and Alexandra Romanov as seen through the eyes of their young kitchen boy, Leonka. Now an ancient Russian immigrant, Leonka claims to be the last living witness to the Romanovs’ brutal murders and sets down the dark secrets of his past with the imperial family. Does he hold the key to the many questions surrounding the family’s murder? Historically vivid and compelling, The Kitchen Boy is also a touching portrait of a loving family that was in many ways similar, yet so different, from any other.

Praise For The Kitchen Boy: A Novel of the Last Tsar (A Romanov Novel #1)…

"A gripping and entirely believable description of the last days of the Romanovs...Thoroughly enjoyable, educational, and just a good old-fashioned page-turner." —Margaret George, author of Mary, Called Magdalene

"This is a dream of a book... [Robert Alexander's] tough, stylish prose is the perfect medium for this fast-becoming myth of evil and innocence, of frailty and courage, of betrayal and redemption." —Judith Guest

"Through the power of the author's imagination, we see not only the tragedy of the Emperor, but that of a human being, man, and father." —Ivan Artsyshevsky, The Romanov Family Association

Robert Alexander has studied at Leningrad State University, worked for the U.S. government in the former U.S.S.R., and traveled extensively throughout Russia.
Loading...
or support indie stores by buying on