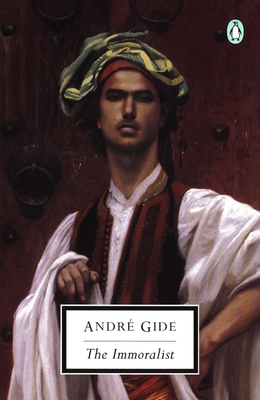 “The humanist has four leading characteristics—curiosity, a free mind, belief in good taste, and a belief in the human race—and all four are present in Gide. . . . The humanist of our age.” —E. M. Forster

In The Immoralist, André Gide presents the confessional account of a man seeking the truth of his own nature. The story’s protagonist, Michel, knows nothing about love when he marries the gentle Marceline out of duty to his father. On the couple’s honeymoon to Tunisia, Michel becomes very ill, and during his recovery he meets a young Arab boy whose radiant health and beauty captivate him. An awakening for him both sexually and morally, Michel discovers a new freedom in seeking to live according to his own desires. But, as he also discovers, freedom can be a burden. A frank defense of homosexuality and a challenge to prevailing ethical concepts, The Immoralist is a literary landmark, marked by Gide’s masterful, pure, simple style.

Praise For The Immoralist…

André Paul Guillaume Gide (1869–1951) was born in Paris. His father, who died when he was eleven, was Professor of Law at the Sorbonne. An only child, Gide had an irregular and lonely upbringing and was educated in a Protestant secondary school in Paris and privately. He became devoted to literature and music, and began his literary career as an essayist, and then went on to poetry, biography, fiction, drama, criticism, reminiscence, and translation. By 1917 he had emerged as a prophet to French youth and his unorthodox views were a source of endless debate and attack. In 1947 he was awarded the Nobel Prize for Literature and in 1948, as a distinguished foreigner, was given an honorary degree at Oxford. He married his cousin in 1895; he died in Paris at the age of eighty-one.

Among Gide's best-known works in England are Strait is the Gate (La Porte étroite), the first novel he wrote, which was published in France in 1909; La Symphonie Pastorale, 1919; The Immoralist (L'Immoraliste), 1902; The Counterfeiters (Les Faux-Monnayeurs), published in 1926; and the famous Journals covering his life from 1889 to 1949 and published originally in four volumes.
Loading...
or
Not Currently Available for Direct Purchase