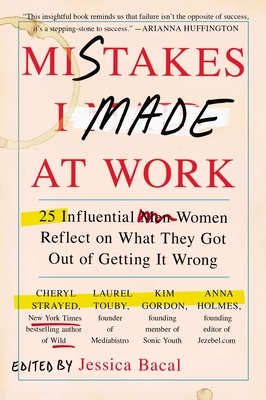 Mistakes I Made at Work

High-achieving women share their worst mistakes at work—and how learning from them paved the way to success.

In Mistakes I Made at Work, a Publishers Weekly Top 10 Business Book for Spring 2014, Jessica Bacal interviews twenty-five successful women about their toughest on-the-job moments. These innovators across a variety of fields – from the arts to finance to tech – reveal that they’re more thoughtful, purposeful and assertive as leaders because they learned from their mistakes, not because they never made any. Interviewees include:

For readers of Lean In and #Girlboss, Mistakes I Made for Work is ideal for millenials just starting their careers, for women seeking to advance at work, or for anyone grappling with issues of perfectionism, and features fascinating and surprising anecdotes, as well as tips for readers.

Praise For Mistakes I Made at Work: 25 Influential Women Reflect on What They Got Out of Getting It Wrong…

“This insightful book reminds us that even the women we most admire have dealt with failure. It perfectly captures one of the wisest things my mother ever told me -- that failure isn’t the opposite of success, it’s a stepping stone to success.” –Arianna Huffington

“As valuable for its wisdom and its advice as it is pure fun to read.” –Cathy Hanaeur, author of The Bitch in the House

“Refreshing…filled with humor and humiliation, plus loads of hard-earned career management advice.” –Elle

Jessica Bacal is the director of the Wurtele Center for Work & Life at Smith College. She lives with her husband and two children in Northampton, MA.
Loading...
or support indie stores by buying on
(This book is on backorder)