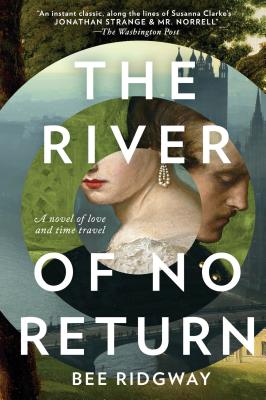 The River of No Return (Paperback)

“This romp in time has it all! There's a dashing hero, several feisty heroines, some really nasty bad guys, plenty of mystery,suspense, humor and romance as Ridgeway navigates her eminently plausible route along the River of Time filled with paradoxes and switchbacks. Shelve this alongside Gabaldon's Outlander, and Harkness' Discovery of Witches.”
— Annie Leonard, The Next Chapter, Knoxville, IA
View the List

Named a Notable Fiction Book of 2013 by The Washington Post
An engrossing adventure, with mystery, romance, humor, and impeccable historical detail. The Boston Globe
Devon, 1815. The charming Lord Nicholas Davenant and the beguiling Julia Percy should make a perfect match.
But before their love has a chance to grow, Nicholas is presumed dead in the Napoleonic war.
Nick, however, is lost in time. Somehow he escaped certain death by leaping two hundred years forward to the present day where he finds himself in the care of a mysterious society the Guild. Questioning the limits of the impossible, Nick is desperate to find a way back to the life he left behind. Yet with the future of time itself hanging in the balance, could it be that the girl who first captured his heart has had the answers all along? Can Nick find a way to return to her?

Bee Ridgeway is an English professor at Bryn Mawr College. She lives in Philadelphia.

Praise For The River of No Return…

Praise for The River of No Return:

"A wonderful first novel...Ridgway spins an intricate narrative in elegant prose that combines the best of various genres - spy thriller, historical romance, science fiction, fantasy. Throughout, her juxtaposition of past and present is dazzling and often amusing...The River of No Return has the feel of an instant classic." -Washington Post

“A time-traveling couple enter The River of No Return in Bee Ridgway’s thrill ride.” –Vanity Fair "A highly entertaining romp; her historical details are accurate, and the character are believable. Fans of Diana Gabaldon's "Outlander" series should enjoy this time-traveling romantic adventure, which may also attract readers who like historical fiction with a twist." —Library Journal  “In her stellar debut, Ridgway manages the permutations of the time-travel trope with originality and aplomb.” —Booklist  “Ridgway offers a well-crafted blend of science fiction, romance, mystery, and historical fiction.” —Publishers Weekly "Bee Ridgway's deliciously fun debut covers ground similar to smart bodice rippers such as Outlanders and Discovery of Witches." - All You "[A] passionate, thought-provoking and consistently fun debut that's best described as a Regency romance wrapped in a spy novel covered in science fiction." - Shelf Awareness "Verdict: Buy, and make sure to start it on a day you don't have to go to work." - Book Riot "The River of No Return by Bee Ridgway is teh kind of book that is meant to be read under the covers with a flshlight." - Chicago Reader