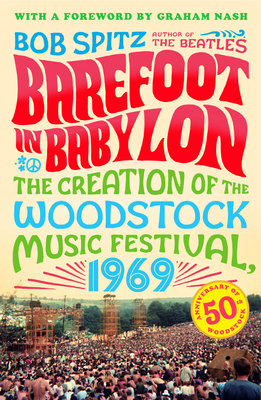 The Creation of the Woodstock Music Festival, 1969

The perfect gift for music fans and anyone fascianated by Woodstock, Barefoot in Babylon is an in-depth look at the making of 1969’s Woodstock Music Festival—one of Rolling Stone’s “50 Moments That Changed the History of Rock and Roll.”

“Mr. Spitz feeds us every riveting detail of the chaos that underscored the festival. It makes for some out-a-sight reading, man.”—The New York Times Book Review

Fifty years ago, the Woodstock Music Festival defined a generation. Yet, there was much more than peace and love driving that long weekend the summer of 1969. In Barefoot in Babylon, journalist and New York Times bestselling author Bob Spitz gives readers a behind-the-scenes look at the making of Woodstock, from its inception and the incredible musicians that performed to its scandals and the darker side of the peace movement. With a new introduction, as well as maps, set lists, and a breakdown of all the personalities involved, Barefoot in Babylon is a must-read for anyone who was there—or wishes they were.

Praise For Barefoot in Babylon: The Creation of the Woodstock Music Festival, 1969…

Praise for Barefoot in Babylon

“[Takes] the lid off that mammoth rock concert and reveal[s] the astonishing antics the promoters performed, commercially and personally, to get the Thing off the ground...Mr. Spitz feeds us every riveting detail.”—The New York Times Book Review

“Goes further toward explaining the counterculture, in all its contradictions and ironies, than many another valiant attempt at social commentary...A novelistic structure and a tough, spicy style... Evident too are the beauty, the magic, the gentle spirit and selfless devotion that Woodstock has come to symbolize for many people.”—Baltimore News American

“It happens that behind the legendary concert was a string of events no less amazing...An important, impressive work...Reads like an adventure.”—Timothy White, former Associate Editor, Rolling Stone

“Tough, well-documented...Reveals the gritty and sometimes greedy realities behind the Woodstock Music Festival...Provoking, exciting, and full of the kind of truth that is so sorely needed about an event which has become a part of American folklore.”—Tim O'Brien

Bob Spitz is a journalist and author with wide experience in the music industry. He has managed Bruce Springsteen and Elton John. He is the New York Times bestselling author of Barefoot in Babylon: The Creation of the Woodstock Music Festival, 1969; Dylan: A Biography; Dearie: The Remarkable Life of Julia Child; and The Beatles: The Biography.
Loading...
or
Not Currently Available for Direct Purchase