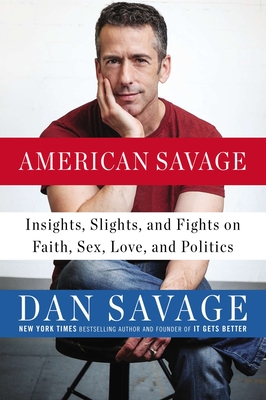 Insights, Slights, and Fights on Faith, Sex, Love, and Politics

On the heels of his Emmy-winning It Gets Better campaign, Dan Savage delivers “powerful messages for both the head and heart” (Entertainment Weekly)

From the moment he began writing his syndicated sex-advice column, Savage Love, Dan Savage has never been shy about expressing his opinion on controversial topics—political or otherwise. Now, he addresses issues ranging from parenting and the gay agenda to the Catholic Church and health care. Among them:

•  Why straight people should have straight “pride” parades, too
•  Why Obamacare, as good as it is, is “still kinda evil”
•  Why what passes for sex-ed in America is more like “sex dread”
•  Why the Bible is “only as good and decent as the person reading it”

Speaking to a broad range of subjects with brutal honesty and irreverent humor, American Savage cements Dan Savage’s place as a provocative and insightful voice in American culture.

"Savage's essays on fatherhood, cheating, and the subset of Americans, in American Savage, who still think sexuality is a choice are powerful messages for both the head and the heart." - Entertainment Weekly

"Dan Savage is the most prominent activist for gay rights in America....many of his proponents forget just how good of a writer he is.  American Savage is everything a longtime reader of Savage would expect: a series of hilarious, often touching, essays that deal with sexuality, monogamy, religion, gun rights, and Savage’s family." –The A.V. Club

“Savage writes conversationally and wonderfully. Although some might be put off at first by his strong opinions, most readers will ultimately find him engaging. Recommended for general readers who enjoy the cutting edge essay format.” -Library Journal

“At turns serious and humorous, this multifaceted collection of essays will entertain both longtime Savage fans and new readers.” –Kirkus

“[Savage] takes on gun control, Obamacare, sex education in public schools, and gay marriage, among other hot-button topics. His provocative points are sharply made… Fans of Savage’s in-your-face rhetoric are sure to rally around his liberal pulpit.” -Booklist

“Dan Savage is a gay superhero… marvelously discursive and footnote-laden collection of new essays… American Savage will most likely preach to the choir, but its polemics are still beautiful, verbal slap-downs of sanctimonious bigotry.” –Time Out New York

“American Savage is at once deliberately outrageous and seriously thoughtful.” - The Seattle Post-Intelligencer

“An entertaining and thought-provoking collection of short-winded essays…Savage has the ability to smooth over his rant’s foul-mouthed edges with a refreshing self-deprecation and, yes, a good old-fashioned Midwestern kindness.”  - The Minneapolis Star Tribune

"American Savage: Insights, Slights and Fights on Faith, Sex, Love and Politics comes roaring into bookstores with such high potential that one can’t help expecting it to fail. But this book, with all its wisdom, ideas and ideals, does exactly the opposite - it supersedes all his previous work.” –The Edge