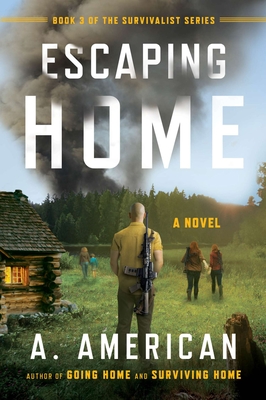 A Novel (The Survivalist Series #3)

In this thrilling novel in A. American's Survivalist series, a man learns that in a world with no rules, the strength of family is the only thing that can pull you through.

When society ceases to exist, who can you trust?

After the collapse of the nation’s power grid, America is under martial law—and safety is an illusion. As violence erupts around him, Morgan Carter faces one of his most difficult decisions yet: whether to stay and defend his home, or move to a more isolated area, away from the prying eyes of the government. He and his family are hesitant to leave their beloved Lake County, but with increasingly suspicious activities happening in a nearby refugee camp, all signs point towards defecting. Morgan and his friends aren't going to leave without a fight, though—and they'll do anything to protect their freedoms.

A. American has been involved in prepping and survival communities since the early 1990s. An avid outdoorsman, he has a spent considerable time learning edible and medicinal plants and their uses as well as primitive survival skills. He currently resides in Florida with his wife of more than twenty years and his three daughters. He is the author of the Survivalist series.
Loading...
or support indie stores by buying on
(This book is on backorder)