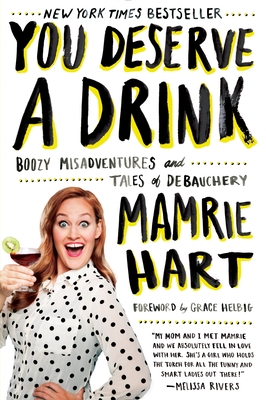 You Deserve a Drink

Boozy Misadventures and Tales of Debauchery

A New York Times bestselling, riotously funny collection of boozy misadventures from the creator of the YouTube series, “You Deserve a Drink.”

Mamrie Hart is a drinking star with a Youtube problem. With over a million subscribers to her cult-hit video series “You Deserve a Drink,” Hart has been entertaining viewers with a combination of tasty libations and raunchy puns since 2011. Hart also co-wrote/co-starred in Dirty Thirty and Camp Takota with Grace Helbig and Hannah Hart.

Finally, Hart has compiled her best drinking stories—and worst hangovers—into one hilarious volume. From the spring break where she and her girlfriends avoided tan lines by staying at an all-male gay nudist resort, to the bachelorette party where she accidentally hired a sixty-year-old meth head to teach the group pole dancing (not to mention the time she lit herself on fire during a Flaming Lips concert), Hart accompanies each story with an original cocktail recipe, ensuring that You Deserve a Drink is as educational as it is entertaining.

With cameos from familiar friends from the YouTube scene and a foreword by Grace Helbig, this glimpse into Hart’s life brings warmth and humor to the woman fans know and love. And for readers who haven’t met Mamrie yet—take a warm-up shot and break out the cocktail shaker: you’re going to need a drink.

“Hart is a pull-no-punches comedian with a talent for self-deprecation in the guise of self-aggrandizement, a winning formula.”—The New York Times

Praise For You Deserve a Drink: Boozy Misadventures and Tales of Debauchery…

Praise for You Deserve a Drink

“I loved this book. Mamrie Hart is hilariously brilliant, and really puts things in perspective with You Deserve a Drink. Specifically that I do deserve a drink. And the only person I feel like having one with right now is her.”—Judy Greer, actress and author of I Don’t Know What You Know Me From: Confessions of a Co-Star

“You know that voice you have inside that tells you not to do certain things because they are reckless, embarrassing, or socially unacceptable? Mamrie Hart does not have that voice. She does it all and tells it all in You Deserve a Drink.”—Rachel Dratch, SNL alum, author of Girl Walks Into a Bar

“My Mom and I had Mamrie on IN BED WITH JOAN and we absolutely fell in love with her! She carries her wit in the palm of her hand, usually along with a delicious cocktail. In this book, Mamrie breaks into hilarious as easily as she drops into poignant. A girl who holds the torch for all the funny and smart ladies out there!”—Melissa Rivers

“This book is way better than my book.”—Hannah Hart, New York Times bestselling author of My Drunk Kitchen

“You Deserve a Drink is like a night out with Mamrie Hart: charmingly weird & hilariously memorable. All that’s missing is the hangover.”—Tyler Oakley, Youtube star

“Sassy, foul-mouthed, funny and fearless...I like this book so much I can’t decide whom to loan it to first.”—Raleigh News & Observer

Mamrie Hart is from middle-of-nowhere North Carolina. She now lives in Los Angeles with her tiny hairless dog, Beanz.
Loading...
or support indie stores by buying on