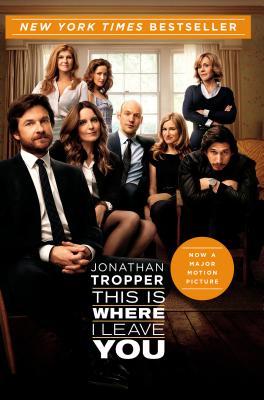 Featuring cover artwork from the major motion picture starring Jason Bateman, Tina Fey, and Adam Driver "Often sidesplitting, mostly heartbreaking... Tropper is] a more sincere, insightful version of Nick Hornby, that other master of male psyche." --USA Today The death of Judd Foxman's father marks the first time that the entire Foxman clan has congregated in years. There is, however, one conspicuous absence: Judd's wife, Jen, whose affair with his radio- shock-jock boss has recently become painfully public. Simultaneously mourning the demise of his father and his marriage, Judd joins his dysfunctional family as they reluctantly sit shiva-and spend seven days and nights under the same roof. The week quickly spins out of control as longstanding grudges resurface, secrets are revealed and old passions are reawakened. Then Jen delivers the clincher: she's pregnant. This Is Where I Leave You is Jonathan Tropper's (One Last Thing Before I Go) most accomplished work to date, and a riotously funny, emotionally raw novel about love, marriage, divorce, family, and the ties that bind-whether we like it or not.

Praise For This Is Where I Leave You…

“Hilarious and often heartbreaking… a novel that charms by allowing for messes, loose ends and the reality that there's only one sure ending for everyone.” —The Los Angeles Times

“The novel is artful and brilliant, filled with colorful narratives and witty dialogue. ... [Tropper] can find the funny in any situation.” —Associated Press

“Jonathan Tropper is the new breed of novelist who writes for men and women with ease and grace.”—Haven Kimmel

Jonathan Tropper is the author of One Last Thing Before I Go, How to Talk to a Widower, Everything Changes, The Book of Joe, and Plan B. He lives with his family in Westchester, New York, where he teaches writing at Manhattanville College. He is currently adapting This Is Where I Leave You as a feature film for Warner Brothers Studios and is a screenwriter, co-creator, and executive producer of the HBO/Cinemax television show Banshee (produced by Alan Ball), premiering in 2013.
Loading...
or
Not Currently Available for Direct Purchase