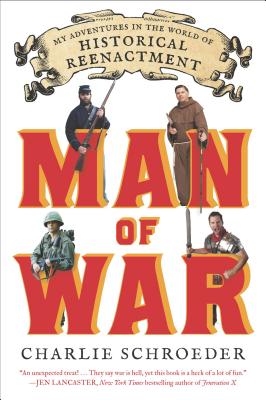 My Adventures in the World of Historical Reenactment

It’s the middle of a heat wave, and Charlie Schroeder is dressed in heavy clothing and struggling to row a replica eighteenth-century bateau down the St. Lawrence River. Why? Months earlier, Schroeder realized he knew almost nothing about history. But he wanted to learn, so the actor—best known for his role as Mr. Pussy on Sex and the City—spent a year reenacting it.

Man of War is Schroeder’s hilarious account of the time he spent chasing Celts in Arkansas, raiding a Viet Cong village in Virginia, and flirting with frostbite en route to “Stalingrad” in Colorado. Along the way, he illuminates just how much the past can teach us about the present.

CHARLIE SCHROEDER lives in Los Angeles with his wife, Wendy, who suffered through his awful haircuts during the writing of Man of War.

Praise For Man of War: My Adventures in the World of Historical Reenactment…

"Man of War is an unexpected treat!  I was enamored of Charlie Schroeder's travelogue through the subculture of reenactment and fascinated by his modern take on ancient warfare.  (Who knew the proper buttons were so important?)  They say war is Hell, yet this book is a heck of a lot of fun."—Jen Lancaster, bestsellling author of Jeneration X

"Charlie Schroeder has produced a rollicking good ride in this compulsively scintillating book. From first page to last, it is an often surprising delight."—Jay Winik, bestselling author of April 1865

"A hilarious romp through 3000 years of history, one forced march at a time."—J. Maarten Troost, author of The Sex Lives of Cannibals

"The wonderfully funny and humane Charlie Schroeder has served his country valiantly, and now we should all honor him by buying his book. The best way to spread the word? A period-authentic confetti cannon."—Henry Alford, author of Would It Kill You to Stop Doing That?

"An entertaining read. The companionable author’s gimlet eye rarely misses the absurd or touching incidents he encountered during his explorations."—Kirkus Reviews