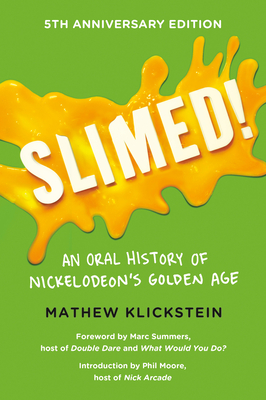 Before the recent reboots, reunions, and renaissance of classic Nickelodeon nostalgia swept through the popular imagination, there was SLIMED!, the book that started it all. With hundreds of exclusive interviews and have-to-read-‘em-to-believe-‘em stories you won't find anywhere else, SLIMED! is the first-ever full chronicle of classic Nick…told by those who made it all happen!

Nickelodeon nostalgia has become a cottage industry unto itself: countless podcasts, blogs, documentaries, social media communities, conventions, and beyond. But a little less than a decade ago, the best a dyed-in-the-wool Nick Kid could hope for when it came to coverage of the so-called Golden Age (1983–1995) of the Nickelodeon network was the infrequent listicle, op-ed, or even rarer interview with an actual old-school Nick denizen.

Pop culture historian Mathew Klickstein changed all of that when he forged ahead to track down and interview more than 250 classic Nick VIP’s to at long last piece together the full wacky story of how Nickelodeon became “the Only Network for You!”

Celebrate the fortieth anniversary of Nickelodeon with this special edition of SLIMED! that includes a new introduction by Nick Arcade’s Phil Moore in addition to a foreword by Double Dare’s Marc Summers and an afterword by none other than Artie, the Strongest Man in the World himself (aka Toby Huss).

After you get SLIMED!, you’ll never look at Nickelodeon the same way again.

“Mathew Klickstein might be the geek guru of the 21st century.”—Mark Mothersbaugh

Praise For Slimed!: An Oral History of Nickelodeon’s Golden Age…

“Mathew Klickstein might be the geek guru of the 21st century.”—Mark Mothersbaugh

“Reading Slimed is like taking a trip back to summer camp to see your old friends.  Mathew Klickstein has captured the outrageous, inventive, and crazy times of early Nickelodeon, and the stories are sweeter than a mug of bug juice.  A nation of Nick fans will salute his shorts.”—Steve Slavkin, creator of Salute Your Shorts

“Somewhere between a tribute, a belated yearbook, and an autopsy, Slimed! attempts to figure out--with the help of nearly 200 performers, writers, producers, and execs who worked at the network between 1985 and 2000--how a fledgling channel with virtually no original programming identified, captured, and entertained the hell out of its preteen demographic…. Slimed! is the best kind of blast from the past: dishy, unwholesome, and thought-provoking enough to make you question your own memories.”—The Village Voice

“Slimed! explores the behind-the-scenes drama of controversial shows like Ren & Stimpy and the family lives of its child stars, but it also reveals the network’s unconventional programming and knack for recruiting up-and-coming talent (Hunger Games author Suzanne Collins was on the writing staff for Clarissa Explains It All)—as well as the secret ingredients to the network’s famous green slime.—The Atlantic, Fall Books Preview

Mathew Klickstein received his BFA from the screenwriting program at University of Southern California, co-created a weekly television show for National Lampoon, wrote Steven Seagal’s only horror film (for good or ill) and directed a feature-length rockumentary about a “disabled rock band" called Act Your Age: The Kids of Widney High Story. He is also the director/producer of On Your Marc, a documentary about TV icon Marc Summers. And he's the co-writer of Mike Reiss' memoir Springfield Confidential: Jokes, Secrets, and Outright Lies from a Lifetime Writing for The Simpsons. His book Nerding Out was published in China in late 2017, and his journalism work has appeared in such publications as Wired, New York Daily News and Splitsider.
Loading...
or
Not Currently Available for Direct Purchase