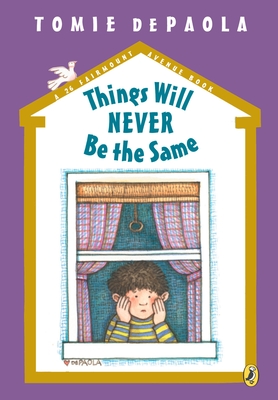 Things Will Never Be the Same (26 Fairmount Avenue #5) (Paperback)

Tomie has his own diary with a lock and a key&150now he can write down all his secrets and no one will be able to read them. All through the year, exciting things happen and Tomie writes about them in his diary. Sledding down the steep hill on his new Junior Flexible Flyer, being a pirate in the dance recital, and starting second grade with real art lessons at last! Then one Sunday morning Tomie's family hears news on the radio that changes everything. Master storyteller Tomie dePaola takes us back to 1941 and lets us experience what life was like growing up in the dePaola household.

Tomie dePaola was born in Meriden, Connecticut, in 1934, to a family of Irish and Italian background. His determination to create books for children led to a BFA from Pratt Institute in Brooklyn, New York, and an MFA from the California College of Arts & Crafts in Oakland, California.

His particular way with color, line, detail, and design have earned him many of the most prestigious awards in his field, among them a Caldecott Honor Award for Strega Nona, the Smithsonian Medal, the Kerlan Award from the University of Minnesota for his "singular attainment in children's literature," the Catholic Library Association's Regina Medal for his "continued distinguished contribution," and the University of Southern Mississippi Medallion. He was also the 1990 United States nominee for the Hans Christian Andersen Medal for illustration, and received the Laura Ingalls Wilder Award for lifetime contribution to children's literature in 2011.

DePaola has published almost 200 children's books in 15 different countries over the past 30 years. Among his most well-known titles are the Strega Nona series, 26 Fairmount Avenue, and The Legend of the Indian Paintbrush.

DePaola lives in an interesting house in New Hampshire with his four dogs. His studio is in a large renovated 200-year-old barn.