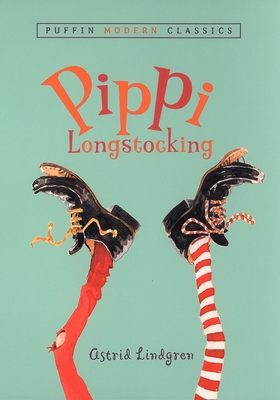 The beloved story of a spunky young girl and her hilarious escapades.

Tommy and his sister Annika have a new neighbor, and her name is Pippi Longstocking. She has crazy red pigtails, no parents to tell her what to do, a horse that lives on her porch, and a flair for the outrageous that seems to lead to one adventure after another!

Astrid Lindgren, author of many popular books for children, won the Hans Christian Andersen Award for her contribution to children's literature.

1941Lindgren family moves to apartment in Dalagatan in Stockholm, where Astrid Lindgren lives since.

1944Writes her first story, Pippi Longstocking (Pippi Långstrump) as a birthday present for her daugther; second prize of Rabén & Sjöt;gren for her first Britt-Mari book.

1957The Swedish State Award for Writers of High Literary Standard - Astrid Lindgren is the first children's literature author to receive this award.

1970Retires as children's books editor from Rabén & Sjögren; receives the Golden Ship Award of the Swedish Society for the Promotion of Literature, the Heffaklumpen of the Swedish newspaper Expressen for Emil and Piggy Beast, and the Lewis Carroll Shelf Award for Christmas in the Stable.

1975Litteris et artibus (plaque presented by the king of Sweden) and Silvergriffel for The Brothers Lionheart.

1979Wilhelm-Hauff-Prize and the International Janusz-Korczak Award for The Brothers Lionheart.

1989Albert Schweitzer Medal; honorary doctor at the University of Warsaw.