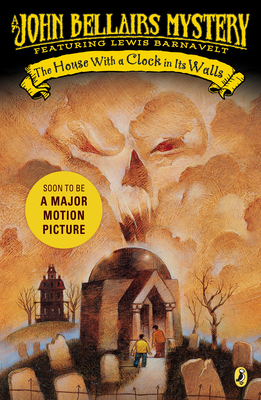 The House with a Clock in Its Walls (Lewis Barnavelt)

"The House With a Clock in Its Walls will cast its spell for a long time."--The New York Times Book Review

When Lewis Barnavelt, an orphan. comes to stay with his uncle Jonathan, he expects to meet an ordinary person. But he is wrong. Uncle Jonathan and his next-door neighbor, Mrs. Zimmermann, are both magicians! Lewis is thrilled. At first, watchng magic is enough. Then Lewis experiments with magic himself and unknowingly resurrects the former owner of the house: a woman named Selenna Izard. It seems that Selenna and her husband built a timepiece into the walls--a clock that could obliterate humankind. And only the Barnavelts can stop it!

Is there no end to the suspense John Bellairs can create? (School Library Journal, starred review)

Brace yourself for a wild ride. (Kirkus Reviews)

John Bellairs (1938-1991) was the critically acclaimed, best-selling author of many Gothic novels for middle-graders, including the novels starring Johnny Dixon and Lewis Barnavelt.
Loading...
or support indie stores by buying on