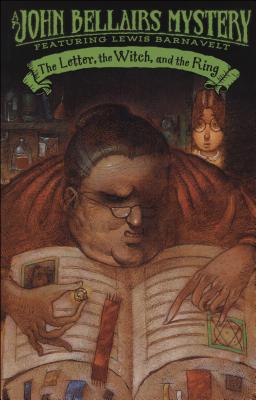 The Letter, the Witch, and the Ring

A rich, magical gothic mystery from the legendary John Bellairs

Rose Rita wishes she could go to camp like her bets friend, Lewis. She's sure that boys get to have all the fun.--until Mrs. Zimmermann offers her an adveture of her own. Mrs. Zimmermann's cousin Oley has left her his farm, as well as a ring that he thinks is magic. But when the two arrive at the deserted farm, the ring has mysteriously vanished. What power does it have? And will the person who took it use the ring to do evil?

John Anthony Bellairs (1938-1991) is an award-winning American author, perhaps best known for his fantasy novel The Face in the Frost. He is also the author of many gothic mystery novels for children and young adults, including The House with a Clock in its Walls (which received both the New York Times Outstanding Book of Award and the American Library Association Children's Books of International Interest Award), The Lamp from the Warlock's Tomb (which won the Edgar Allen Poe Award), and The Specter from the Magician's Museum (which won the New York Public Library "Best Books for the Teen Age" Award.
Loading...
or
Not Currently Available for Direct Purchase