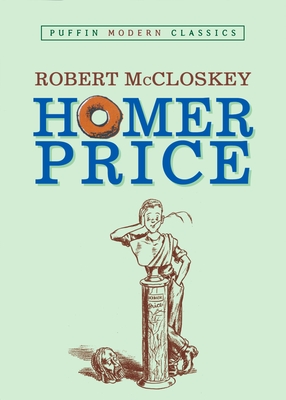 Welcome to Centerburg!  Where you can win a hundred dollars by eating all the doughnuts you want;  where houses are built in a day; and where a boy named Homer Price can foil four slick bandits using nothing but his wits and pet skunk.

The comic genius of Robert McCloskey and his wry look at small-town America has kept readers in stitches for generations!

Robert McCloskey (1914-2003) wrote and illustrated some of the most honored and enduring children's books ever published. He grew up in Hamilton, Ohio, and spent time in Boston, New York, and ultimately Maine, where he and his wife raised their two daughters. The first ever two-time Caldecott Medal winner, for Make Way for Ducklings and Time of Wonder, McCloskey was also awarded Caldecott Honors for Blueberries for Sal, One Morning in Maine, and Journey Cake, Ho! by Ruth Sawyer.  He was declared a Living Legend by the Library of Congress in 2000.  You can see some of his best-loved characters immortalized as statues in Boston's Public Garden and Lentil Park in Hamilton, Ohio.
Loading...
or support indie stores by buying on