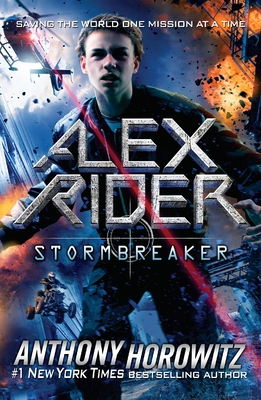 Meet the orphan turned teen superspy who's saving the world one mission at a time—from #1 New York Times bestselling author!

They said his uncle Ian died in a car accident. But Alex Rider knows that’s a lie, and the bullet holes in the windshield prove it. Yet he never suspected the truth: his uncle was really a spy for Britain’s top secret intelligence agency. And now Alex has been recruited to find his uncle’s killers . . .

Alex Rider's is debut mission is packed with bonus material - including an extra Alex Rider short story, a letter from Anthony Horowitz, and much more!

From the author of Magpie Murders and Moriarty.

Anthony Horowitz (anthonyhorowitz.com) is a world-renowned screenwriter for film and television, having received multiple awards. And he is, of course, the author of the #1 New York Times bestselling Alex Rider novels, which have become bestsellers the world over, spawned a major motion picture, and a line of graphic novels. A master of the spy thriller, Anthony is the only writer authorized by both the Arthur Conan Doyle and Ian Fleming Estates to write original Sherlock Holmes and James Bond novels, respectively. Anthony lives with his wife in London, England; they are parents to two grown boys. Follow Anthony on Twitter @AnthonyHorowitz.