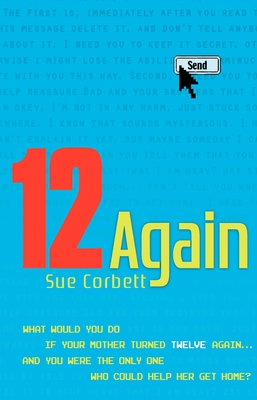 In this captivating novel, wife and mother of three Bernadette McBride makes a wish she never expects to have granted—to be young again. When she awakens—transformed into a twelveyear- old—on what should be the morning of her fortieth birthday, she is at first jubilant, and then quickly realizes how complex life has suddenly become. She enrolls in her son’s seventh-grade computer class in hopes of enlisting his help, but it’s not that easy. . . . Patrick, Bernadette’s oldest son, has no idea what happened to his mother, but he refuses to give up hope. Unless he can get her back, he faces a life of waiting on his brothers. Can Patrick do the impossible? Can he rescue his mother . . . and return his family’s life to normal?

Sue Corbett is the daughter of Irish immigrants and grew up in a Long Island neighborhood very similar to the one depicted in 12 Again. Ms. Corbett has worked as a journalist for fifteen years in Missouri, South Carolina, Florida and, now, Virginia, where she lives with her husband and their three young children. As anyone who knows her will tell you, she really is half-Looney. However, she has only been twelve once. (So far.)
Loading...
or
Not Currently Available for Direct Purchase