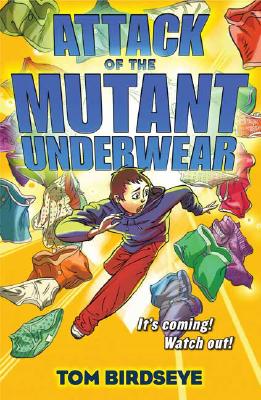 Attack of the Mutant Underwear

Meet Cody Lee Carson. Birthday: April 1. Past history: doofus, bozo-brain. Now that Cody’s in a new school in a new town, he has a chance to reinvent himself. Through his “New Me” journal, readers follow him through his fifth-grade year—including everything from student council elections, science fairs, crushes, and one disastrous “talent” show. Will he make it through in one piece—without showing his Tweety-Bird underwear again?

Praise For Attack of the Mutant Underwear…

"Despite its outlandish cover art and title, Birdseye's (The Eye of the Stone) down-to-earth novel presents the journal of a chatty fifth grader determined to change his image as he enters a new school."--Publishers Weekly

"Fifth-grader Cody Carson is new to town and determined to become a "new me," a changed kid. The old Cody found himself caught in one embarrassing situation after another, most notably being sprawled onstage in his underwear. The new Cody is determined to be cool and makes some real strides in building friendships, improving grades, and acting responsibly . . . Both the title and cover will draw readers to this book."--Children's Literature
"A sort of male companion for Phyllis Reynolds Naylor's early "Alice" (Atheneum) and "Boys"/"Girls" battle books (Delacorte). A well-paced, positive, and pleasant read."--School Library Journal

Tom Birdseye is a well-known American children’s author. He’s known for writing books such as  Attack of the Mutant Underwear, Just Call Me Stupid, and Tarantula Shoes. In addition to his best-known works, Birdseye has also written stories with the lofty themes of faith and race.
Loading...
or
Not Currently Available for Direct Purchase