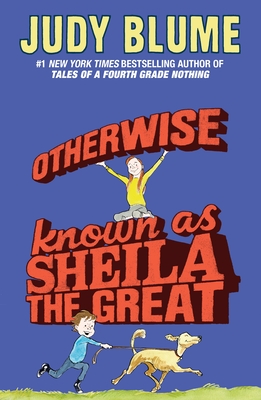 Celebrate 45 years of Otherwise Known as Sheila the Great!

Part of the classic Fudge series from Judy Blume, bestselling author of Tales of a Fourth Grade Nothing.

Who is Sheila Tubman? Even Sheila isn’t sure. Sometimesshe feels like confident Sheila the Great, and other timesshe’s secret Sheila, who’s afraid of spiders, swimming,and, most of all, dogs. When her family decides to leavethe city for a summer in the country, Sheila will haveto suffer everything from long-eared dogs to swimminglessons to creepy spiders. That’s enough to drive a city girlnuts! If she survives at all, Sheila may be forced to admitthat she’s no supergirl.

Love Fudge, Peter, and Sheila? Read all these books featuring your favorite characters:
Tales of a Fourth Grade Nothing
Superfudge
Fudge-a-Mania
Double Fudge

Praise For Otherwise Known as Sheila the Great…

Tales of a Fourth Grade Nothing is the first in a five-book series about Peter, Fudge, and Sheila. Judy lives with her husband in Key West and New York City.You can visit her at judyblume.com.
Loading...
or support indie stores by buying on