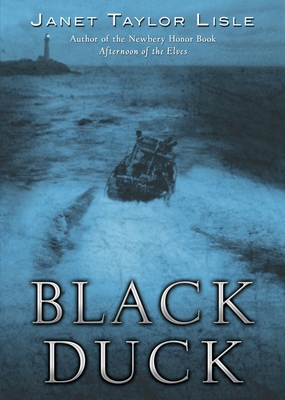 It is spring 1929, and Prohibition is in full swing. So when Ruben and Jeddy find a dead body washed up on the shore of their small coastal Rhode Island town, they are sure it has something to do with smuggling liquor. Soon the boys, along with Jeddy’s strongwilled sister, Marina, are drawn in, suspected by rival bootlegging gangs of taking something crucial off the dead man. Then Ruben meets the daring captain of the Black Duck, the most elusive smuggling craft of them all, and it isn’t long before he’s caught in a war between two of the most dangerous prohibition gangs.

Lots of adventure and mystery. (VOYA)

The setting's cinematic detail brings the exhilarating action close, and readers will easily see themselves in young Ruben. (Booklist)

Janet Taylor Lisle was born in Englewood, New Jersey and grew up in Farmington, Connecticut, spending summers on the coast of Rhode Island. The eldest and only daughter in a family of five children, she was educated at local schools and at fifteen entered The Ethel Walker School, a girl's boarding school in Simsbury, Ct.

After graduation from Smith College in 1969 with a degree in English Literature, she enlisted and was trained for work in VISTA (Volunteers in Service to America). She lived and worked for the next two years in Atlanta, Georgia, organizing food-buying cooperatives in the city's public housing projects and teaching in an early-child care center. Catalyzed by this experience, she enrolled in journalism courses at Georgia State University with the idea of writing about the poverty she had seen. This was the beginning of a reporting career that extended over the next ten years.

With the birth of her daughter in 1977, Lisle turned to writing projects that could be accomplished at home. In 1984, The Dancing Cats of Applesap, her first novel for children, was published. Subsequently, she has published ten other novels.

Afternoon of the Elves, a 1990 Newbery Honor Book, has been translated into six languages. It was produced as a play by the Seattle Children's Theater in 1993, and continues to be performed in children's theaters throughout the U.S. In this book, as in others she has written, the author plumbs a borderland between reality and fantasy where imagination holds sway and the ordinary surfaces of life crack open to reveal hidden worlds.

Elves, fairies and exotic creatures make appearances in her novels but whether they are real within the story, or merely imaginative projections of her characters, is often left unresolved.

"I think of magic as that which is still waiting to be discovered," the author has said. "I put it in my books to remind readers (myself included) to keep a sharp eye out. The unknown is everywhere, all around us and lurking even in our own minds."

She lives on the Rhode Island coast with her husband, Richard Lisle, and their daughter Elizabeth, a college student.