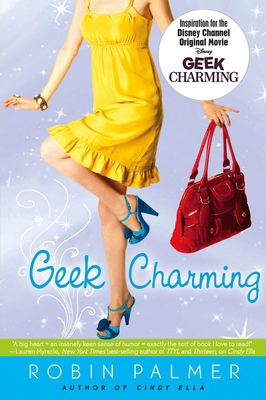 The ideal L.A. fairy tale for fans of Once Upon a Time and L.A. Candy!
Inspiration for the Disney Channel TV movie, Geek Charming!

Dylan Shoenfield is the princess of L.A.'s posh Castle Heights High. She has the coolest boyfriend, the most popular friends, and a brand-new 'it' bag that everyone covets. But when she accidentally tosses her bag into a fountain, this princess comes face-to-face with her own personal frog: self professed film geek Josh Rosen. In return for rescuing Dylan's bag, Josh convinces Dylan to let him film her for his documentary on high school popularity. Reluctantly, Dylan lets F-list Josh into her A-list world, and is shocked to realize that sometimes nerds can be pretty cool. But when Dylan's so-called prince charming of a boyfriend dumps her flat, her life--and her social status--comes to a crashing halt. Can Dylan--with Josh's help--pull the pieces together to create her own happily-ever-after?

Robin Palmer grew up in Massachusetts and New Jersey, and graduated from Boston University before she hit the road for Hollywood. Starting as an assistant in the television literary department of the William Morris Agency, she quickly moved up the ranks and spent the next decade as a literary agent, producer, and television network executive at Lifetime Television, where she developed over one hundred scripts and oversaw the production of over thirty of the cable network's original movies. In 2001, she remembered that she had originally intended to spend her life either as a writer or a toll booth collector (so she could indulge her penchant for spending her days alone reading), but as there are no toll roads in southern California, she decided to give the writing thing a try. Since then, she's written everything from screenplays to essays to a novel to a preschool guide. Although she's constantly threatening to move, she currently resides in New York City.
or
Not Currently Available for Direct Purchase
Copyright © 2020 American Booksellers Association