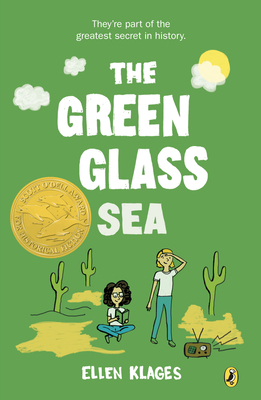 It's 1943, and eleven-year-old Dewey Kerrigan is en route to New Mexico to live with her mathematician father. Soon she arrives at a town that, officially, doesn't exist. It is called Los Alamos, and it is abuzz with activity, as scientists and mathematicians from all over America and Europe work on the biggest secret of all--"the gadget." None of them--not J. Robert Oppenheimer, the director of the Manhattan Project; not the mathematicians and scientists; and least of all, Dewey--know how much "the gadget" is about to change their lives.

Praise For The Green Glass Sea (The Gordon Family Saga #1)…

“Klages makes an impressive debut with an ambitious, meticulously researched novel set during WWII. Writing from the points of view of two displaced children, she successfully recreates life at Los Alamos Camp, where scientists and mathematicians converge with their families to construct and test the first nuclear bomb.”—Publishers Weekly, starred review

"Dewey, ten, embarks alone on a mysterious train trip from her grandmother's home in St. Louis to New Mexico, where she will rejoin her often-absent mathematician father. It's 1943, and Dewey's dad is working at Los Alamos -- "the Hill" -- with hundreds of other scientists and their families. Klages evokes both the big-sky landscape of the Southwest and a community where "everything is secret" with inviting ease and the right details, focusing particularly on the society of the children who live there. Dewey seems comfortable with her own oddness (she's small for her age, slightly lame, and loves inventing mechanical gizmos) and serves as something of an example to another girl, Suze, who has been trying desperately to fit in. Their burgeoning friendship sees them through bouts of taunting, their parents' ceaseless attention to "the gadget," personal tragedy, and of course the test detonation early on July 16, 1945, which the two girls watch from a mesa two hundred miles away: "Dewey could see the colors and patterns of blankets and shirts that had been indistinct grays a second before, as if it were instantly morning, as if the sun had risen in the south, just this once." Cameo appearances are made by such famous names as Richard Feynman (he helps Dewey build a radio) and Robert Oppenheimer, but the story, an intense but accessible page-turner, firmly belongs to the girls and their families; history and story are drawn together with confidence." -The Horn Book Magazine, starred review