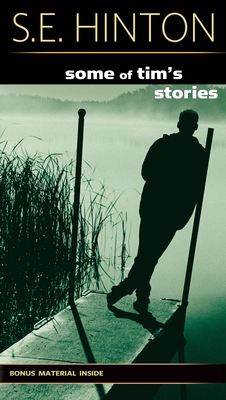 Some of Tim's Stories

Another classic from the author of the internationally bestselling The Outsiders

Continue celebrating 50 years of The Outsiders by reading S. E. Hinton's profound and wry compilation of fourteen short stories. Terry and Mike are cousins whose families are almost seamlessly intertwined. Raised as close as brothers and living happy childhoods, neither one thinks of what can go wrong. But the unexpected deaths of both their fathers catapult their lives in two very different directions. Terry finds trouble with the law, while Mike lives his life racked with guilt and sadness. S. E. Hinton gives readers a gritty view of how one incident, one tragedy, affects two boys very differently, and changes their lives forever.

S. E. Hinton's career as an author began while she was still a student in high school in Tulsa, Oklahoma. Disturbed by the clashes of the two gangs in her high school, the Greasers and the Socs, Hinton wrote The Outsiders, an honest, sometimes shocking novel told from the point of view of a 14-year-old Greaser names Ponyboy Curtis. The Outsiders was published during Hinton's freshman year at college, and was an immediate sensation. The book was also made into a film in 1983, directed by Francis Ford Coppola and featuring budding young stars Tom Cruise, Matt Dillon, and Rob Lowe. The overnight success of The Outsiders brought a lot of pressure, resulting in a three-year-long writer's block. Her boyfriend (now husband) eventually helped break this block by suggesting she write two pages a day before going anywhere. This ultimately led to her second novel, That Was Then, This Is Now, which was also made into a film in 1985, starring Emilio Estevez. Ms. Hinton went on to write several other novels, including Rumble Fish and Tex. In 1988, she was awarded the first ever Margaret A. Edwards Award, given in honor of "an author whose book or books, over a period of time, have been accepted by young people as an authentic voice that continues to illuminate their experiences and emotions, giving insight into their lives." S. E. Hinton still lives in Oklahoma with her husband, where she enjoys writing, riding horses, and taking courses at the university.
Loading...
or
Not Currently Available for Direct Purchase