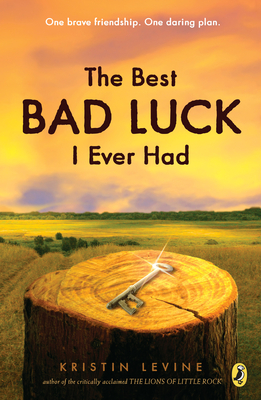 The Best Bad Luck I Ever Had

“Dit Sims thinks it's 'the worst bad luck' when the new postmaster's child turns out to be a bookish 'colored' girl instead of the boy he expected. Dit and Emma Walker gradually form an unlikely friendship, and when blatant racism rears its head, they set out to save a black man unjustly sentenced to death. Set in a small Southern town in 1917, this coming-of-age story is believable and well-written, and Dit's personal growth is moving and remarkable.”
— Trish Brown, Hooray for Books!, Alexandria, VA
View the List

A powerful story about race and an unlikely friendship from award-winning author of The Lions of Little Rock.

The last thing Harry "Dit" Sims expects when Emma Walker comes to town is to become friends. Propertalking, brainy Emma doesn't play baseball or fish too well, but she sure makes Dit think, especially about the differences between black and white in the 1910s. But soon Dit is thinking about a whole lot more when the town barber, who is black, is put on trial for a terrible crime. Together Dit and Emma come up with a daring plan to save him from the unthinkable.

Praise For The Best Bad Luck I Ever Had…

"A fine debut novel by an author to watch."—Kirkus Reviews

"Readers will find humor in his candid account, universality in his dilemmas and blunders, and inspiration in his friendship with Emma and their mutual desire for social justice."—School Library Journal

"Levine’s story treats racism frankly and with no mincing of words. The highlight of this coming-of-age journey comes from watching the two kids learn about the world and come to care about each other in the way of 13-year-olds."—Booklist

Kristin Levine (kristinlevine.com) received her BA in German from Swarthmore College and an MFA in film from American University. She spent a year in Vienna, Austria, working as an au pair, and has taught screenwriting at American University. Currently, she lives in Alexandria, Virginia, with her two daughters. She is the author of the critically acclaimed The Best Luck I Ever Had, The Lions of Little Rock, and The Paper Cowboy.
Loading...
or support indie stores by buying on