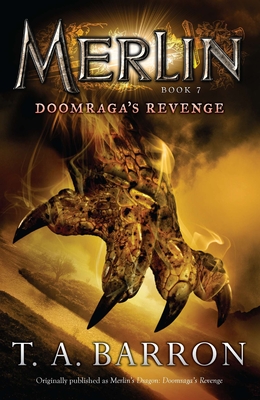 Basil becomes Merlin's partner as they battle the mysterious shadows that threaten the new Avalon. A dark magic has been spreading across Avalon. Initially, the events seemed unrelated: a war in Fireroot between the dwarves and the fire dragons, blight in Stoneroot, and disputes throughout the realms. But as Merlin and Basil scour the realms, they begin to realize that looming behind the growing chaos is a single dark threat—an enemy that they’ve never encountered. One that must be stopped before all of Avalon is lost.
In this jaw-dropping sequel to the mega-hit Merlin’s Dragon, T. A. Barron sends Merlin, Rhia, and Basil, the greatest dragon ever, on a mission across Avalon to root out this new enemy. But sacrifices will be made, relationships will be tested, and precious lives will be lost.

T.A. Barron is the award-winning author of fantasy novels such as The Lost Years of Merlin epic—soon to be a major motion picture. He serves on a variety of environmental and educational boards including The Nature Conservancy and The Land and Water Fund of the Rockies, and is the founder of a national award for heroic children. Following a life-changing decision to leave a successful business career to write full-time in 1990, Barron has written seventeen books, but is happiest when on the mountain trails with his wife, Currie, and their five children.
Loading...
or support indie stores by buying on
(This book is on backorder)