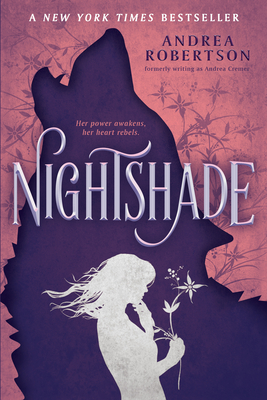 “Just when you thought you had enough of werewolves, along comes Nightshade, which turns the genre on its head. High school cliques take on a new meaning with wolves and their packs. This story is full of twists, suspense, and betrayal. You will be caught between two boys: one human, and one werewolf. The ending will shock you and leave you begging for more!”
— Hallie Wilkins, Anderson's Bookshop, Naperville, IL
View the List

Calla is the alpha female of a shape-shifting wolf pack. She is destined to marry Ren Laroche, the pack's alpha male. Together, they would rule their pack together, guarding sacred sites for the Keepers. But then, Calla saves a beautiful human boy, who captures her heart. Calla begins to question everything - her fate, her existence, and her world and the orders the Keepers have asked her to follow. She will have to make a choice. But will she follow her heart if it means losing everything, including her own life?

RAVE REVIEWS FOR THE NIGHTSHADE SERIES:

“Yet another young adult novel filled with supernatural beasties, but this teen wolf tale is actually good and will keep you reading intently.”—ENTERTAINMENTWEEKLY.COM

“An imaginative . . . paranormal-suspense story. The book’s underlying themes of individualism and freedom . . . lift it to a higher level.”—KIRKUS REVIEWS

“There’s enough action to engage any reluctant reader . . .will no doubt have teens debating the relative merits of werewolves versus vampires.” —BOOKLIST

“Clever young adult saga that leaves readers on the edge of their seats.”—ASSOCIATED PRESS

“Nightshade is historical fiction—with a modern pop culture twist . . .a book for well-read hopeless romantics who like their heroines conflicted, their love interests smoldering, and their passions triangulated and torrid, yet unfulfilled.” —LOS ANGELES TIMES

Andrea Robertson is the internationally bestselling author of the Nightshade series and of Invisibility, which she co-wrote with David Levithan. She is also the author of the Inventor’s Secret trilogy and Forged in Fire and Stars. Originally from Minnesota, she now lives in California.