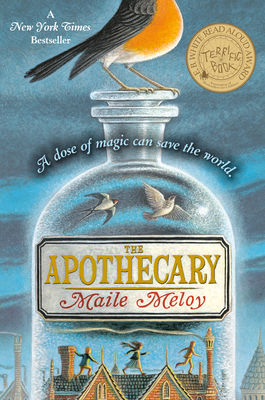 It's 1952 and the Scott family has just moved from Los Angeles to London. Here, fourteen-year-old Janie meets a mysterious apothecary and his son, Benjamin Burrows - a fascinating boy who's not afraid to stand up to authority and dreams of becoming a spy. When Benjamin's father is kidnapped, Janie and Benjamin must uncover the secrets of the apothecary's sacred book, the Pharmacopoeia, in order to find him, all while keeping it out of the hands of their enemies - Russian spies in possession of nuclear weapons. Discovering and testing potions they never believed could exist, Janie and Benjamin embark on a dangerous race to save the apothecary and prevent impending disaster.

Together with Ian Schoenherr's breathtaking illustrations, this is a truly stunning package from cover to cover. Contains a teaser chapter of the sequel, The Apprentices.

"[The blend of history, culture, and the anxiety of the time with magical 'science' will keep readers just as spellbound as the characters." — Kirkus reviews

* "[Readers] will be quickly swept up in this thoroughly enjoyable adventure, filled with magic, humor, memorable characters, and just a bit of sweet romance." — Publishers Weekly, starred review

"Satisfies on all levels." — The New York Times

"Meloy offers a strong narrator in Janie and an intriguing mix of history and mystery." — Booklist

Maile Meloy is the award-winning author of The Apothecary and The Apprentices as well as the adult short story collections Both Ways Is the Only Way I Want It and Half in Love, and the novels Liars and Saints and A Family Daughter. You can visit Maile at www.mailemeloy.com.
Loading...
or support indie stores by buying on